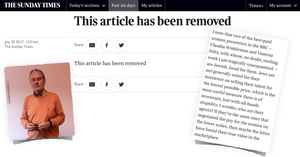 Further to the sacking of Kevin Myers from the Sunday Times…

…It has been asked, quite reasonably, why on earth none of the editors saw a problem before publishing the piece.

The answer is that they’ve never seen a problem with his work before or, if they did, thought the potential eyeball attention outweighed the risk. Major newspapers have been publishing Myers for years, and he has always said the same kinds of things….
…We live in an age in which there is a great deal of moral panic about online abuse. It isn’t moral panic because there is no such abuse, but because the focus on social media is a type of displacement and scapegoating.

National newspapers have been commodifying racist, sexist and homophobic spite and bullying for years. They have created a decrepit caste of ghastly celebrities, whose fame is built entirely on who they victimise for a living.

And as we are learning, the broadsheets are often no better than the tabloids—indeed, by offering a patina of legitimacy to boorish and self-serving sadists, they may be even worse.

Yet the newspapers and news broadcasters, globally, are in decline. Audiences are falling, revenues are falling and, crucially, trust in journalists and outlets— even the broadsheets—has plummeted. The age of the Internet, signalling the decline of six hundred years of print culture, has also ended the ideological monopolies of print empires.

As the British press discovered to its cost at the last election, this process is much more accelerated here than elsewhere. The fact that even the ‘serious’ press makes much of its coin out of such mediocre malice, is one reason why.

Kevin Myers was the inevitable result of a press culture that trades on shock (Richard Seymour, Prospect)

Earlier: ‘The Iterations of Sexism/Racism’

13 thoughts on “The Shock Doctrine”