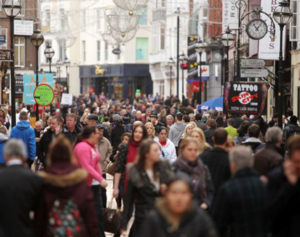 Ireland has now recovered from the economic crash of a decade ago, according to Goodbody stockbroker’s latest quarterly Irish Economy Health Check.

It is forecasting a return of domestic spending levels to their 2007 peak this year and suggests that full employment will be achieved by the end of next year.

Goodbody’s report says rapid growth in construction and consumer spending will push core domestic demand beyond previous forecasts and Ireland will retain its status as one of the fastest-growing European economies.

With jobs growing at the fastest pace since 1999, unemployment will fall to just 5% in late 2018, according to Goodbody Chief Economist Dermot O’Leary.

As a result, Ireland may need to start relying on immigrant labour to maintain its momentum as one of Europe’s fastest-growing economies.

16 thoughts on “Keeping The Recovery Going”