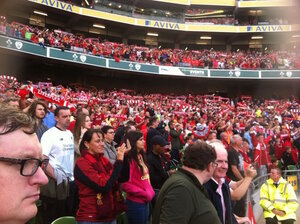 The Basque woman five seats down from me was in awe. The stadium was packed. Over 50,000 souls had taken over the place and turned it red. It was only a ‘friendly’, but the supporters of the ‘home’ team cheered every pass and move with a gusto which was totally out of kilter with the importance of the occasion.

“Why does everyone in Ireland support Liverpool?” she asked me at half-time. “Do you not support your own teams?”

In the city of Shamrock Rovers, Bohemians, and St Patrick’s Athletic, she was shocked to see so many Dubliners come out to support a team from the old colonial power.

The Stars Were Bright, Nando