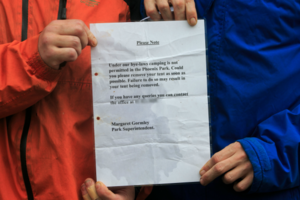 “Homeless men have spoken out after their tents and belongings were taken by Phoenix Park authorities.

….The two men, Darren Doyle, 35, and Christopher Doyle, 28, were among an estimated 10-15 people who were issued eviction notices and were told to leave and remove their tents ‘as soon as possible’.”

….On Tuesday, they returned to the park to find their belongings and tents were removed despite the fact that they had left a note on cardboard in the door of the family sized tent explaining that they would be back to collect their items.”

Have You Got Your Rent Book?

His Name Was Jack