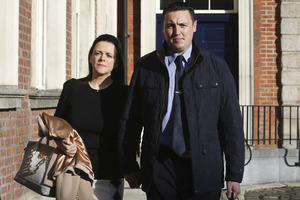 The partner of Garda whistleblower Keith Harrison Marissa Simms, who has claimed to have raised concerns about a garda being involved in the distribution of drugs in Athlone in 2008, is continuing to give evidence.

Once finished, Garda Harrison will give evidence.

Garda Harrison is involved in the Disclosures Tribunal as he claims he has been targeted by senior officers and that Tusla social workers were “brought into the equation due to the manipulation of his situation and the extraction of an unfair and untrue series of allegations of serious domestic misconduct by his domestic partner“.

Supreme Court judge Peter Charleton, who is overseeing the proceedings, is specifically looking at the tribunal’s term of reference ’n’ – which is “to investigate contacts between members of An Garda Siochana and TUSLA in relation to Garda Keith Harrison”.

It follows a visit made by social worker Donna McTeague in early 2014 to the home of Ms Simms and Garda Harrison in Donegal in which Ms McTeague spoke with the children in the home – a visit which the couple claims has had a profound effect on them.

Yesterday, the tribunal took a turn when it heard Ms Simms say she has no issues with Tusla or the HSE or with Ms McTeague whom, she said, acted professionally and appropriately on foot of receiving a referral from the gardai.

It was also put to Ms Simms by Desmond Dockery SC, for Inspector Goretti Sheridan and Sgt Brigid McGowan – who took a statement from Ms Simms about Garda Keith Harrison in October 2013 but which Ms Simms subsequently withdrew in January 2014 – that she has no basis for believing that gardai manipulated the HSE in relation to the referral.

On foot of this, Mr Dockery asked Ms Simms that, if that was her position, on what grounds did she make a complaint to GSOC last year in which she alleged the gardai abused their authority and made a referral in relation to Ms Simms’ children.

Ms Simms said she based it on her thinking that it wasn’t a coincidence that soon after she withdrew her statement on January 11, 2014, she received a letter from Tusla on February 2, 2014.

Mr Dockery suggested to Ms Simms that she is someone who has “a casual regard for people’s professional reputations”.

At one point, Judge Peter Charleton directly asked Ms Simms: “What are you actually saying about the Garda and the HSE?”

At another point, Paul Anthony McDermott SC, for Tusla, stated:

“…there is a letter written on behalf of Marisa Simms and Garda Harrison by their solicitors to Dr [Katherine] Zappone, who is the Minister for Children and Youth Affairs; in other words, my client’s Minister…it says: “The manner of intervention of Tusla in our client’s family life is a cause of concern and is by any measure an inexcusable abuse of their position.”

“It was my understanding that the reason we’re here in this module was to investigate that allegation. It appears as though it is no longer being pursued.”

For the past week, the tribunal has heard of incidents and events in 2013 that led up to Ms McTeague’s visit and claims, and counter-claims, about the same.

“The purpose of the strategy meeting on 21st October was to inform the HSE of the serious allegations that were contained in Ms Simms’ statement.

“In relation to the notes of the HSE, I can’t answer for them, but I can say that I have never been asked to forward a report of that nature in relation to any matter that I have ever dealt with the HSE.”

The tribunal also heard yesterday that, on October 7, 2013, the day after Ms Simms made her statement, she looked up safety orders on the internet.

Under direct examination from Kathleen Leader, BL, for the tribunal, Ms Simms said that the reason she did was so was because Insp Sheridan had mentioned safety orders to her during the 8.5-hour meeting in Letterkenny Garda Station and that, as she had never heard of one, she looked it up online.

It was suggested yesterday to Ms Simms that, based on what was in her statement and her texts, a cynical person might think Ms Simms is now claiming the burn threat to be something other than that recorded in her statement “because you are now in a stable relationship with him [Garda Harrison] and you don’t want any of the bad things to happen to him that you looked up on the 7th October, didn’t want him to lose his job, or be prosecuted in relation to the threats and you didn’t want a safety order any more?”

“I accept that, but I’m not here to defend Garda Keith Harrison. I am here because my children have Pulse IDs and they don’t deserve that.”

Previously: Meanwhile At The Disclosures Tribunal