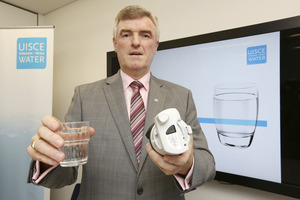 At Dublin City Council, he forced through the Covanta waste plant.

Following this he oversaw the launch of Irish Water.

How can we thank John Tierney?

Irish Water had to put aside more than €470,000 as part of a special deal to ensure former boss John Tierney could be paid his full pension aged 57 and after working for just three years at the company.

Documents have revealed how if Mr Tierney stayed in his previous job at Dublin City Council, he would not have been entitled to his full pension until he was sixty.

However, as part of the deal he made when he switched jobs to take up a position as managing director at Irish Water, his pension instead had to be made payable as soon as his contract ended.

Because Dublin City Council would not have paid Mr Tierney his pension until he was sixty – Irish Water had to make up the shortfall to cover the extra three years.

“At the time of Mr Tierney’s appointment [January 2013] the then Minister for Communications, Energy and Natural Resources [Pat Rabbitte] had responsibility for Ervia, and he approved the contract with the consent of the Minister for Public Expenditure [Brendan Howlin] and … the Minister for [the] Environment. [Phil Hogan]”

Why Irish Water had to put aside €473,000 so former boss John Tierney could get full pension aged 57 (Ken Foxe)