At Dublin City Council, he forced through the Covanta waste plant.

Following this he oversaw the launch of Irish Water.

How can we thank John Tierney?

Irish Water had to put aside more than €470,000 as part of a special deal to ensure former boss John Tierney could be paid his full pension aged 57 and after working for just three years at the company.

Documents have revealed how if Mr Tierney stayed in his previous job at Dublin City Council, he would not have been entitled to his full pension until he was sixty.

However, as part of the deal he made when he switched jobs to take up a position as managing director at Irish Water, his pension instead had to be made payable as soon as his contract ended.

Because Dublin City Council would not have paid Mr Tierney his pension until he was sixty – Irish Water had to make up the shortfall to cover the extra three years.

“At the time of Mr Tierney’s appointment [January 2013] the then Minister for Communications, Energy and Natural Resources [Pat Rabbitte] had responsibility for Ervia, and he approved the contract with the consent of the Minister for Public Expenditure [Brendan Howlin] and … the Minister for [the] Environment. [Phil Hogan]”

Why Irish Water had to put aside €473,000 so former boss John Tierney could get full pension aged 57 (Ken Foxe)

You may recall previous reports detailing how Irish Water spent €16million on extending its lease – by 10 years – at its Colville House, Talbot Street, Dublin 1 headquarters just three days after the general election.

Jerry Grant has been appointed managing director of Irish Water. The former head of asset management in the utility, he replaces John Tierney who was the company’s first boss.

You may recall how Mr Grant was managing director of RPS Consulting Engineering from 2002 until 2012 – before he joined Irish Water in 2013.

RPS advised Dublin City Council on the Poolbeg incinerator project which has to date cost the State almost €100million with more than €30million going to RPS, even though the original contract was for €8.3million.

The EU found the contract between Dublin City Council and RPS did not conform with EU law.

‘Meters Help The Customer And They Help Irish Water’

Who Is Running Water?

One of a series of emails sent from Irish Water’s managing director John Tierney (top) to the company’s staff in Dublin – released to RTE under the Freedom of Information Act.

It was sent on Wednesday April 1, 2015, the same day anti-Irish Water demonstrators gathered outside the Irish Water offices on Talbot Street, Dublin.

.@IrishWater boss John Tierney apologises to customers for mistakes that have been made. #TV3News pic.twitter.com/FYgJjb8KHq 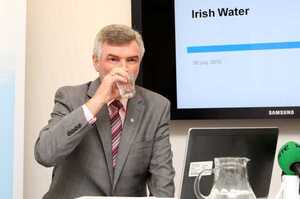 One source says the feeling post-Cabinet is the position of John Tierney seems safe. @IrishTimes

Irish Water managing director John Tierney was labelled a “gobshite” at last night’s weekly Fine Gael parliamentary party meeting in Leinster House, which was attended by the Taoiseach.
Kildare North TD Anthony Lawlor made the comments during a heated discussion on water charges, which saw around a dozen TDs criticise the new utility. Tipperary North TD Noel Coonan said he was not going to be associated with such language.

Fine Gael TDs complained at the meeting they were getting a generic response from Irish Water when they forwarded concerns from their constituents. “It has the potential to do us a lot of damage, like the medical cards,” a party TD said.

You may recall that Mr Tierney, a former Dublin City Manager, invoked a veto to overrule a Dublin City Council vote 52-50 against the sale of its waste-collection services to Greyhound.

And was forced to apologise after Dublin City Council was accused of mismanaging public funds, following an official audit of the €80million spent on the Poolbeg incinerator project.

Previously: “I Have Every Confidence In John Tierney’ “[Greyhound] says it has begun refunding those affected and has claimed that the blunder was caused by the actions of its main rival in the capital, City Bin. Customers who switched to City Bin in November and December were slapped with Greyhound’s annual service charge, which ranges from €50-€200 depending on the individual contract.”

How on earth did we end up with Greyhound anyway?

In December 2011, then Dublin City Council manager – current CEO of Irish Water – John Tierney,  invoked a veto [introduced by former Environment Minister Martin Cullen] to overrule a Dublin City Council vote 52-50 against the sale of its waste-collection services to Greyhound.

This was despite the fact that Greyhound was, in 2009, forced to pay back €1.3million to Iarnród Éireann because of inadequate services. And, in January 2011, Greyhound was forced to pay €9,000 in fines and costs to the Environmental Protection Agency for breaches of its licence to run a waste facility in Clondalkin, Dublin.

Previously: “I Have Every Confidence In Him” [Enda Kenny, top, this morning and John Tierney, head of Irish Water, above]

Former Dublin City Council manager and CEO of Irish Water John Tierney will have to explain the €95million spend on the unbuilt Poolbeg Incinerator to the Public Accounts Committee..

Taoiseach Enda Kenny told reporters outside the Dáil that he expects Mr Tierney will deal with any issues that arise when he appears before PAC.

Enda Kenny:“Irish Water, as you know, is a public utility and will subject to the Freedom of Information Act and all of the expenditure issues that go along with it. So, there’s a very major project to deal with the future of our country, in terms of supply of high quality water for people and business alike. We can’t have a situation where households have to boil water everyday, we can’t have a situation where 40% of what we produce, and then you pay for is leaking into the ground. you have to have consistency and a very high standard and Mr Tierney is heading up the utility called Uisce Éireann, or Irish Water, to deliver that.”

Journalist: “And he’s the right man for the job?”

Kenny: “Well, he’s the Chief Executive of Irish Water. I have every confidence in him to do his job as expected.”

This morning, Environment Editor of the Irish Times Frank McDonald reports on a local government audit into the money spent by Dublin City Council to relocate a firm in Dublin Port, to allow for the building of the Poolbeg incinerator.

In total, the relocation of Westway cost €31million.

Meanwhile, he also reports that the audit looked at the contract between Dublin City Council and RPS, a contract which the European Commission subsequently found was in breach EU rules late last year and will be terminated on January 31.

Mr McDonald reported the local government auditor found financial management was weak while there were concerns raised about the lack of minutes recorded.

“The auditor concluded: ‘it is evident that the financial management . . . has been weak’ and said ‘no proper classification of expenditure on an invoice basis was available to account for monies spent’ on Poolbeg by council management.

“’There is no evidence of monitoring of detailed budgets or financial forecasts . . . or that detailed monthly/quarterly reports were examined to control expenditure, apart from client representative summary reports presented to DCC management.’

“He said the project executive board – headed by former assistant city manager Matt Twomey – “did not meet on a formal basis and therefore no minutes of meetings were retained”.“

Meanwhile, on Prime Time last night, Fintan O’Toole also spoke about the RPS contract with Dublin City Council and the same audit referred to above, in light of the fact that the CEO of Irish Water John Tierney was hired just weeks after the audit was issued.