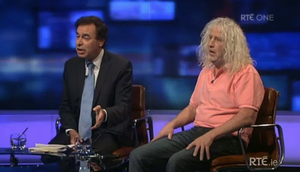 You may recall how, back in May 2013, the then Justice Minister Alan Shatter and Independents 4 Change TD appeared on RTÉ’s Prime Time.

They were there to discuss a penalty points report by then Assistant Commissioner John O’Mahoney – which found there was no widespread quashing of penalty points.

In addition, the then Garda Commissioner Martin Callinan had appeared at the Public Accounts Committee earlier that day.

During the Prime Time appearance, Mr Shatter accused Mr Wallace of having been stopped by the gardaí in May 2012 and that he had been on his phone while driving.

Mr Shatter claimed Mr Wallace had been advised by the guard who stopped him that a fixed ticket charge could be issued and that he could be given penalty points.

Mr Shatter also claimed Mr Wallace was warned not to do it again.

The claims on Prime Time were made almost a month after Gemma O’Doherty, in the Irish Independent, reported that, in July 2007, a car registered to the then Deputy Commissioner Martin Callinan – who was appointed to the position in January 2007 – was caught speeding on camera.

Ms O’Doherty reported the penalty points in relation to this incident were subsequently quashed.

After Prime Time, Mr Wallace told Pat Kenny that he was neither stopped nor warned.

“I was parked at the lights and a Garda vehicle came up beside me. And I was on the phone…which I know, I was wrong, I shouldn’t have been on it. The guard..I rolled down the window, the guard rolled down his window. There was two guards there. And I said ‘oh’, I just had my hand up and they said ‘it’s OK’. And, left it at that. And we just, we made small talk after for maybe about 15/20 seconds and the lights went green and I drove on straight and they pulled out. The guards were friendly.”

The Circuit Civil Court upheld this decision when Mr Shatter made an initial appeal.

However, Mr Shatter appealed again to the High Court.

Former minister for justice Alan Shatter has won his challenge to a finding that his disclosure of information about Independent TD Mick Wallace on a live TV programme, was a breach of his duties under the data protection act.

…Mr Shatter claimed the then Data Protection Commissioner, Billy Hawkes failed to set out the basis for his conclusion the information was personal data and had prejudged that issue and acted in breach of fair procedures.

Mr Shatter’s lawyers said he never had, or saw, any written record of the information communicated to him during a conversation with then Garda Commissioner Martin Callanan.

He said the information was “in his mind” only and what he said did not amount to “processing” it.

17 thoughts on “Meanwhile, In The High Court”