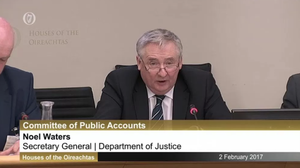 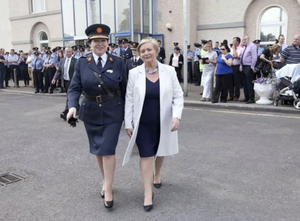 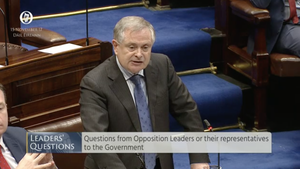 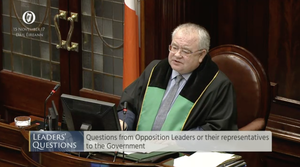 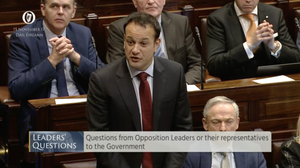 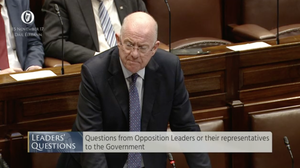 In the middle of an exchange about the treatment of Sgt Maurice McCabe during the O’Higgins Commission of Investigation in 2015.

“I’ve heard one briefing suggesting an allegation so explosive that it might bring down the Government.”

“.., if the Labour party has an allegation to make, they should either make it here and make it very clearly so that we can respond to it or if they’re not willing to do that, well then they should give any evidence they have to the [Disclosures] tribunal.”

You may recall previous posts about questions being recently asked by Labour TD Alan Kelly about the Department of Justice’s knowledge of the legal strategy employed against whistleblower Sgt Maurice McCabe during the O’Higgins Commission of Investigation in 2015.

The legal counsel for the then Garda Commissioner Noirin O’Sullivan told the commission it would argue that Sgt McCabe was making complaints about Garda malpractice because of a grudge that he had and that evidence of this would be based on a meeting Sgt McCabe had with two gardai, Supt Noel Cunningham and Sgt Yvonne Martin, in Mullingar in August 2008.

This legal strategy fell apart after Sgt McCabe proved that the reason for this so-called grudge couldn’t be true – while he gave evidence on May 15, 2015 – and when he later produced a recording of the Mullingar meeting which contradicted what the Chief State Solicitor Eileen Creedon, now a High Court judge, told the commission in a letter on May 18, 2015.

This legal strategy – and the subsequent abandonment of the strategy – was never included in Judge Kevin O’Higgins’ final report when it was finally published on May 11, 2016.

Michael Clifford, of The Irish Examiner, and Katie Hannon, of RTE’s Prime Time, subsequently reported, in May 2016, how Sgt McCabe produced a recording of the Mullingar meeting during the commission and how this ensured the strategy had to be dropped.

“She did find out about it after the fact, but around the time it was in the public domain when everyone else knew about it aswell.

“They were told, the Department was told about the approach taken by the commissioner’s senior counsel but that was after the cross-examination had taken place.

“So they obviously were not in a position, after the fact, to express concerns about it or to counsel against it.”

In addition, Mr Varadkar referred to a phone call that was reportedly made by Ms O’Sullivan to the Department of Justice on May 15, 2015 – the same day Sgt McCabe made it clear to the commission that the reason for his supposed grudge couldn’t possibly be true – and questions that Mr Kelly asked about that.

“I know you’ve claimed that it was a call on the day of the cross-examination to the secretary general [Noel Waters], we haven’t been able to confirm if that’s the case or not.

Within an hour or so of Mr Varadkar’s remarks yesterday, it was announced that the Secretary General of the Department of Justice Noel Waters will be retiring in February as he is approaching 40 years of service.

Mr Waters was the acting Secretary General of the Department of Justice in May 2015.

Labour leader Brendan Howlin raised the matter of Mr Kelly’s questions again – pointing out that Mr Varadkar’s answers of yesterday indicated that there was a year-long window in which Ms Fitzgerald could have been informed of the legal strategy.

Mr Howlin said he wanted clarification on this.

He also asked if Mr Varadkar had spoken directly to Noel Waters about the matter.

During the exchanges between Mr Varadkar and Mr Howlin, Justice Minister Charlie Flanagan stood up and accused Mr Kelly of engaging in a smear campaign against him.

In addition, Mr Varadkar referred to claims that there was an “explosive” allegation that could “bring down the Government”.

He said if an allegation is to be made, then it should be made in the Dail so that it can be addressed.

Brendan Howlin: “We’re still unclear as to the level of involvement or knowledge of the Department of  Justice in this strategy. You said in this house yesterday, Taoiseach, that the Department of Justice and Equality is a big place. That many different people are in it but as things stand, the Department has not been able to find any record of being informed before the fact of the legal strategy that the former commissioner [Noirin O’Sullivan] was going to pursue.

“I’d like you to confirm today whether you’ve spoken directly to the Secretary General of the Department [of Justice Noel Waters] on this matter. And are you satisfied that the absence of  sufficient reassurance for you to confirm to the house that the department was not aware of the strategy to, quote, “go after” Maurice McCabe.

“Yesterday, you said, that the Tanaiste found out about it after the fact but around the same time, it was in the public domain when everybody else knew about it, end quote. Now, this matter only came into the public domain when it was reported on by Mick Clifford and Katie Hannon after the commission itself had reported in May 2016 – a full year after the strategy to go after Maurice McCabe was set out by the commission.

“For it to be true, that the Tanaiste did not become aware of this until the time when it was in the public domain, we must believe two things:

Ceann Comhairle Sean O Fheargail: “Before I call the Taoiseach to respond to that particular matter. Can I just say that Standing Orders are fairly explicit on these matters, wherein we’re dealing with a subject matter that is a subject of court consideration or a judicial tribunal.

“The Standing Order, effectively, says that matters shall not be raised in such a manner that it appears to be an attempt by the Dail to encroach on the functions of the court or the judicial tribunal. Now my predecessors have ruled on this issue in the past and in certain circumstances have allowed questions on a particular matter, matters which were being examined by judicial tribunals.

“And these were allowed in a context where there was considered to be a public interest in having a limited engagement on certain matters whilst having regard to the fact that we should not encroach on the activities and work of the tribunal. So we need to be exceedingly careful here that we do not undermine a tribunal that we, ourselves, have established. Taoiseach?”

“And as they were only informed after the fact, they certainly weren’t in a position to express any reservations about the legal strategy taking place.

“Now, this issue is being going back and forth now for a couple of days. I’ve seen articles in the paper, letters have been exchanged, there have been PQs put down and answered.

“And there have been a lot of briefings going around as well to the effect that there is some, some allegation here. That is explosive. I’ve heard one briefing suggesting an allegation so explosive that it might bring down the Government.

“I think, at this stage, if the Labour party has an allegation to make, they should either make it here and make it very clearly so that we can respond to it or if they’re not willing to do that, well then they should give any evidence they have to the tribunal.”

Charlie Flanagan: “On a point of order, Ceann Comhairle.”

Flanagan: “On a point of order, regarding the fact that the person asking the question made a specific reference to me – I would ask you Ceann Comhairle for protection in this house. I will not have my good name, or my progressional reputation traduced by Deputy Alan Kelly, both inside this house and outside.

Howlin: “Ceann Comhairle, I’m here some time. And I recall tribunals of inquiry where the findings were, if people answered questions in this house, they’d have saved the State millions at times. It’s our job to ask the State questions and hold ministers to account. That’s our job.

“And I’ve no accusation to make, against anybody. I just want the truth. And my questions are very simple…”

Flanangan: “It’s quite clear that I had no hand, act or part…”

Howlin: “No, no, no, quite the reverse. I fully accepted the statement made finally by the Taoiseach yesterday. That neither the current minister or the former minister, I accepted that, I said, now we have clarity on that fact…

Howlin: “The question is the state of knowledge…”

Alan Kelly: “How long are you going to allow this Ceann Comhairle?”

“He told the house yesterday that the Tanaiste wasn’t aware of this until it became into the public domain which was a full year later in May of 2016. So just for clarity, is the Taoiseach telling the house that the strategy was kept from the Tanaiste and the Minister for Justice for a full year by her officials?”

“I think that at least puts into perspective this story. No allegation is being made against anyone.

“The answer I’ve given you is the answer that was given to me. I spoke to the Tanaiste, she told me that she had no hand, act or part in this decision, that she was not aware of it until after the fact, until around the time that it entered the public domain.

“The Department of Justice has said that to me, that they were not made aware of it until after the fact. But the Department of Justice is a big place. It’s not a person, it’s a body that had hundreds of staff and can I put hand on my heart here and say that there isn’t one person somewhere who might have been told something by someone. I can’t give you that answer.

“But what I have been told is that, is that the Department was not made aware of it, until after the fact and the Tanaiste did not become aware of it herself until around the time it entered the public domain.”

‘Such An Issue Was Never Raised’