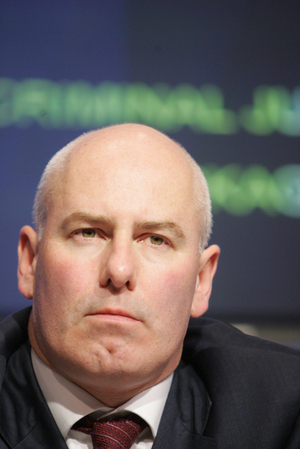 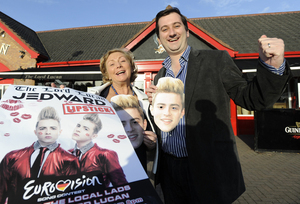 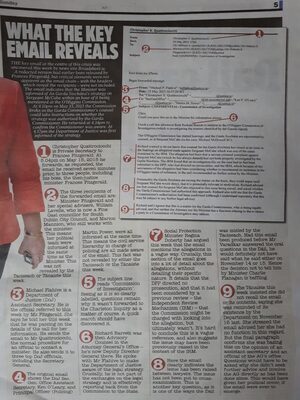 From top: Michael Flahive, of the Department of Justice; Frances Fitzgerald with William Lavelle in 2011; Yesterday’s Irish Mail on Sunday (click to enlarge)

The Irish Mail on Sunday analysed the email sent to Tanaiste Frances Fitzgerald at the centre of the current political crisis.

Michael Flahive, the Department of Justice assistant secretary, sent the email to Christopher Quattrociocchi, Ms Fitzgerald’s private secretary, on Friday, May 15, 2015, at 4.57pm.

In the email, Mr Flahive said he received a call from Richard Barrett, Deputy Secretary General in the Office of the Attorney General, and that, according to Mr Barrett, a disagreement had taken place at the O’Higgins Commission of Investigation between the legal counsel for Sgt Maurice McCabe and the former Garda Commissioner Noirin O’Sullivan.

Mr Flahive claims Mr Barrett told him this occurred because the counsel for Ms O’Sullivan wanted to introduce a complaint that the 2006 investigation into Ms D’s ‘dry humping’ allegation against Sgt McCabe wasn’t investigated properly.

As can be seen from the email, within around seven minutes of receiving this email, Mr Quattrociocchi forwarded it to three people, including Ms Fitzgerald.

On Tuesday night, Sgt McCabe told Taoiseach Leo Varadkar the alleged events outlined in this email never happened and that the transcripts of the O’Higgins Commission of Investigation will prove this.

Sgt McCabe also told the Taoiseach that what was at issue at the commission, on May 15, 2015,  was the fact he had been accused of wanting the DPP’s directions – in respect of a ‘dry humping’ allegation in 2006 – overturned.

Sgt McCabe explained to Mr Varadkar that this couldn’t possibly have been the case as he was very pleased with the DPP’s directions and had no desire for them to be overturned.

Ms Fitzgerald was Minister for Children and Youth Affairs, which oversees Tusla, from March 2011 until May 7, 2014 – when the then Minister for Justice Alan Shatter resigned.

Ms Fitzgerald became Minister for Justice from May 8, 2014.

The Disclosures Tribunal has already heard that, in May 2015, she received a lengthy report from GSOC which stated the 2006 investigation into Ms D’s complaint was carried out correctly.

Readers will recall Ms D made her retrospective ‘humping’ complaint in December 2006, 11 months after her father, a guard, Mr D “lost his position and was reverted to other duties” after Sgt McCabe “caused the institution of serious disciplinary procedure against” Mr D in January 2006.

After the DPP investigated Ms D’s complaint, a letter from the DPP’s office was sent to the State solicitor for Cavan Rory Hayden on April 5, 2007, which stated:

It was May 6, 2014, a day before Supt McGinn received Ms Connolly’s referral, when Sean Guerin SC recommended that a Commission of Investigation be held into Sgt McCabe’s complaints.

This gave rise to the O’Higgins Commission of Investigation.

Ms Fitzgerald, in May 2015, received the aforementioned report from GSOC after a complaint was made by Ms D, which was discussed at the Disclosures Tribunal when Irish Independent journalist Paul Williams gave evidence.

When Ms D gave a statement to GSOC, on July 3, 2014, Ms D told GSOC Mr Williams told her senior members of An Garda Siochana and Government were aware of her allegations.

When asked about this, Mr Williams said it was a “throwaway remark” that the then head of the Garda Press Office Supt Dave Taylor said to him and that he later relayed it to Ms D.

Readers may recall Ms D’s father also made a statement to GSOC.

When they gave their statements, neither Ms D nor Mr D told GSOC about the “monumental cock-up” by RIAN counsellor Laura Brophy and Tusla in relation to the elevation of a ‘dry humping’ allegation to an allegation of rape.

The Disclosures Tribunal has already heard that, after looking at Ms D’s complaint, GSOC reported, in May 2015:

“GSOC established that Inspector Noel Cunningham carried out appropriate inquiries and uncovered no evidence of any criminality on the part of him in the investigation or any other Gardaí and how the investigation was conducted.”

Readers should note Marion Mannion was seconded from Tusla to the Department of Justice on May 8, 2014.

William Lavelle was re-elected to South Dublin County Council in 2014 and would have held this position when he received the email.

And Martin Power has “responsibility at Principal Officer level for ensuring support for the Garda Síochána Ombudsman Commission and the Garda Síochana Inspectorate to enable them to carry out their mandates”.

Earlier: The People Have Spoken

‘Stuff That Would Make The Hair Stand On Your Head’

Meanwhile…That email and the Department of Justice (Katie Hannon, RTÉ) 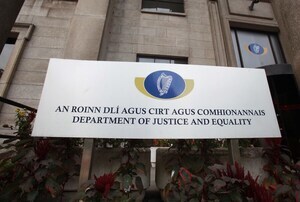 The Attorney General’s office did not provide Tánaiste Frances Fitzgerald with legal advice in 2015 when it contacted her then department about a legal dispute relating to the treatment of Sgt Maurice McCabe at the O’Higgins Commission, RTÉ News has learned.

….This evening, the Department of Justice confirmed to RTÉ News that the contact from the Attorney General’s office was for information purposes only and “not legal advice”.

Politicians on the Government side have defended Ms Fitzgerald claiming she could not have intervened on the basis of what they said was the Attorney General’s legal advice at the time.

Email from Tanaiste' s private secretary on May 25th 2015 confirming she "noted" the previous email advising her of legal strategy pic.twitter.com/4olA5xYcPm

They Believe The Children Are Our Future

51 thoughts on “A Closer Look”