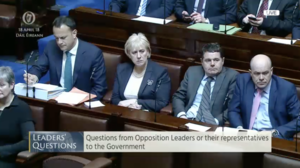 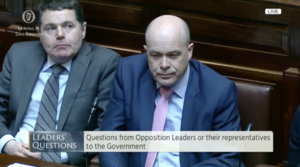 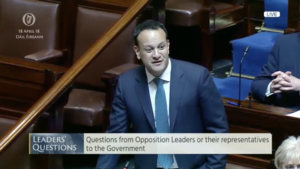 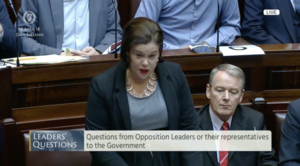 During Leaders’ Questions in the Dail this morning

More details from the affidavit which the Director of Corporate Enforcement Ian Drennan has given to the High Court – in a bid to have inspectors investigate Independent News and Media (INM) – emerged.

The email from Mr Heneghan detailed a conversation the Minister for Communications Denis Naughten had with Eoghan O’Neachtain, director of public affairs at Nigel Heneghan’s PR firm the day before, November 11, 2016.

This discussion was then relayed to Denis O’Brien in the aforementioned email of November 12, 2016.

This was reportedly two months before the minister’s plans were made public.

Taoiseach Leo Varadkar was questioned about the matter.

Sinn Fein TD Mary Lou McDonald pointed out that the email sent to Mr O’Brien “stressed that the information contained within it should be treated with the strictest of confidence”.

Ms McDonald also said that the PR company didn’t log the engagement with the minister with the Lobbying Register.

As he responded, Mr Varadkar outlined the timeline of events, as he saw them – after he told the Dail that he is satisfied that Minister Naughten didn’t disclose any information which was confidential.

Mr Varadkar also said there appeared to be a misunderstanding about the process and that “it’s not a secret process“.

“…I think deputy, almost anyone in Ireland can have access to a minister, it’s not that difficult to access politicians or ministers in Ireland, whether it’s through a constituency clinic or whether it’s simply by requesting a meeting or a phone call.”

“…In terms of timeline, I’m advised that the merge’s process went through the full rigour required of the Act and the guidelines after it was received by Minister Naughton on the 21st November, 2016.

“The recommendation was made by officials on the 4th January 2017 – that the acquisition be referred to a phase two examination and that was approved by Minister Naughten on the 10th of January.” 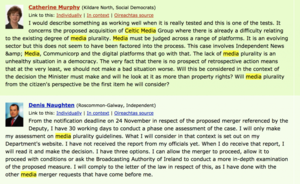 Lesley Buckley could tell Denis O’Brien about the decision to refer the Celtic Media Aquisition to the BAI on 12/11/16. But Minister Naughten told @CathMurphyTD no decision was made on 6/12/16 #INM #Redacted #Dáil pic.twitter.com/xBfOsRFlz5

A few weeks after this reported phonecall between Mr O’Neachtain and Minister Naughten on November 11, 2016, Social Democrats TD Catherine Murphy was told by Minister Naughten that he had not yet decided if he was going to refer the proposed takeover to the BAI (see above).

It appears Minister Naughten told an INM representative but didn’t tell the Dail.

Deputy Murphy has said in a statement:

“The entire matter really opens up questions, yet again, regarding the axis between powerful individuals and political decisions.“

Denis Naughten will give a statement to the Dail and take questions on foot of it at 3pm.

Readers may wish to recall that Nigel Heneghan was appointed to the Broadcasting Authority of Ireland in February 2015.

The position was not advertised.

At the time, the then Minister for Communications Alex White told The Sunday Times he wasn’t required to advertise the position as the compliance committee didn’t come under new rules for appointments to State boards.

In November 2016 – the same month that the alleged exchanges took place between INM representatives and the Minister for Communications Denis Naughten – Mark Tighe, in The Sunday Times, was reporting that Mr Heneghan had to excuse himself from discussions about several complaints it had dealt with because he was acting for two companies connected with Denis O’Brien.

“Nigel Heneghan is a spokesman for Actavo, an O’Brien-owned construction services company formerly called Siteserv, and for Independent News & Media (INM), the newspaper publishing company in which O’Brien is the largest shareholder.

“He declared conflicts of interests in relation to five cases before the BAI compliance committee, according to its 2015 annual report.”

“…Heneghan absented himself from cases involving complaints that dealt with water charges or Irish Water. Actavo was one of three firms contracted by Irish Water to install meters. It became a focus of protests after some people were temporarily jailed for physically stopping Actavo staff working on installations.

“Two of the cases in which Heneghan declared conflicts involved Newstalk, a national radio station owned by O’Brien’s Communicorp. The other three instances involved RTE Radio shows. Heneghan did not declare conflicts in relation to other Newstalk cases that did not involve water charges.”