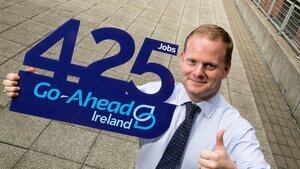 Ed Wills, Managing Director of Go-Ahead Ireland, which was awarded a contract to run 24 of the existing Outer Dublin Metropolitan Area bus routes

The new bus company in Dublin is called Go Ahead.

Before there was Dublin Bus, there was a practice on some CIE buses in the capital whereby, if you couldn’t or didn’t want to pay the correct fare, you handed over a few coins and said, “Go ahead”.

There’s always been some discussion as to whether the money collected as “go ahead” fares was passed on to CIE by the bus staff or was simply a benign social service in hard times.

Perhaps a Broadsheet reader would know? 13 thoughts on “Ask A Broadsheet Reader”