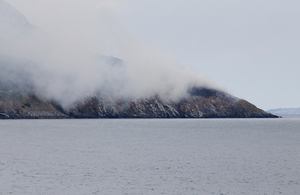 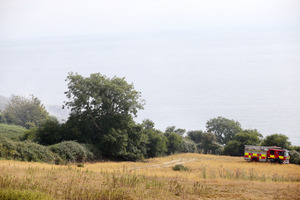 Fire Crew from Greystones working hard to fully extinguish fire close to rail line on Bray Head. The fire started in front of a tent and spread along steep ground east of the cliff walk at around 1 a.m. #bray @BrayTCouncil @GreystonesCC @IrishRail #Wildfire pic.twitter.com/xL8at32arE

Update: Line between Bray and Greystones expected to remain closed for the remainder of the day due to fire damage to signalling and telecoms cabling. Bus transfers btwn Bray/Greystones for Rosslare services. Dublin accepting rail tickets https://t.co/O2Ikl1oy2H

On Bray Head in Co Wicklow.

Emergency services (second picture) at the scene of a fire which broke out on Bray Head this morning (top) which has caused damage to railway infrastructure – forcing the line between Bray and Greystones to be closed for the rest of the day.

Keeping The Fire At Bray

And The Beat Goes On

4 thoughts on “Meanwhile, In Bray”