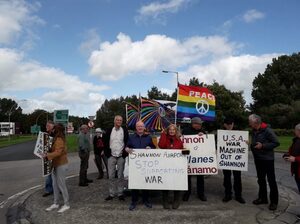 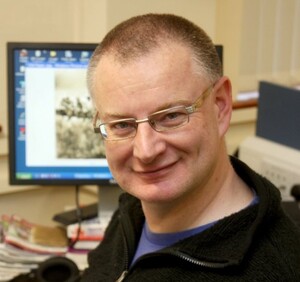 Funny how, in an upside-down world, the small group of peace activists waving flags at a roundabout are made to feel like criminals while the police force ‘protects’ members of the most powerful military in the world . . . just a few metres down the road.

It’s almost a pantomime at this stage, as everyone knows his or her role.

On the first Sunday of every month, the peace activists descend upon the roundabout on the fringes of the civilian airport.

They unfurl their banners and flags, and commuters, bus-drivers, or cars containing families honk their horns in support as they drive by in sunshine, hail, wind, rain or snow.

It’s some record. They haven’t missed a first Sunday of the month for over a decade now and, indeed, the protests have been going on for a lot longer.

They wish they didn’t have to meet at the roundabout, that they could find something better to do on a Sunday afternoon. But every month they feel a need to return.

One man makes the round trip from Donegal, it takes him ten hours by bus. Another comes all the way from Dundalk. He feels he has to make the effort.

Others have less of a journey. Former Irish Army man Edward Horgan and academic John Lannon, who never seem to miss a monthly Sunday gathering, make the short trip out from Limerick City. Quite a few drive down from Galway.

Horgan and Lannon are the two main men behind Shannonwatch, the group of peace activists who protest at the airport every month.

Their mission is simple, to highlight the fact that a ‘neutral’ country is continuing to support the US war machine, to raise awareness, and to remind the Irish Government and international community that this civilian airport on the west coast of Ireland could be facilitating war crimes.

For them, Irish neutrality actually means something. With talk of a European ‘super army’ on the horizon and President Donald Trump set to visit in November, their monthly protest seems as timely and relevant as when they began to assemble outside Shannon over ten years ago.

Even today, as I write this, the National Security Advisor to Donald Trump has attempted to discredit the International Criminal Court. He has described the internationally recognised court as “illegitimate” and “dead” in the eyes of the superpower which uses Shannon every day.

It’s pretty easy to discredit a court if you feel you have something to hide or you are in breach of international law.

They know the routine.

The activists stand at the roundabout. A young lady sees the irony when she pops into the new Starbucks nearby to pick up a coffee. Drivers and their families honk their cars in support. And the gardai maintain a safe distance, sometimes driving up close, though, to monitor the activists and their parked cars.

There are rarely confrontations, but the gardai maintain a visible presence. After all, some of these activists have undertaken direct action – breaking through the airport’s perimeter fence in order to try to inspect the US military or chartered civilian planes. The protest starts at 2pm and finishes within an hour.

It’s a small but clear reminder that not every Irish person is happy with the fact that US troops land in Shannon on their way to and from their wars in the Middle East.

This month’s protest could not have been more timely. During the one-hour vigil at the airport, two Omni Air planes on contract to the US military landed at Shannon.

Shannonwatch activists, who track the military flights in and out of the airport, told me that one of the planes was coming from a NATO base in the north of Norway. The other was on its way to the US from Kuwait.

They said they had no idea whether there were up to 600 troops or cargo on board, and they were pretty sure that the Irish authorities had no idea either.

Horgan, who has a camera with a powerful lens, invited me to join him at the perimeter fence. He focused his camera on the two planes, under the watchful eyes of plain clothes gardai who pulled up alongside him as he took his photos.

Now in his late 70s, with a respected military background, he told me he was banned from flying from Shannon. It’s a bit of an inconvenience, given that he lives just down the road in Limerick.

But he made headlines across the globe when he decided to inspect a US military plane as he was about to board a Ryanair flight to London. Ed does not believe in mellowing with old age as he is disgusted that nobody in Ireland has a clue about who or what is being carried on the military planes at Shannon.

Horgan took legal action against the Irish state in 2003, on the basis that the US military’s use of Shannon violated Ireland’s status as a neutral country.

He finds it strange to be under scrutiny from the gardai every time he brings his camera along to his local airport, but he’s determined to continue annoying those in power.

To him, the criminals are inside the airport fence, not those trying to document their movements from the outside.

As the wind howled around us, Lannon told me that the Shannonwatch people had no intention of giving up their monthly protests.

They will be back at Shannon next month and they hope to organise a huge demonstration if, as expected, President Trump used the airport when he visits Ireland, and nearby Doonbeg in particular, in November.

“Two planes arrived here today which have been contracted out to the US military. One of them has just arrived in from a military base in northern Norway. We believe it may have been involved in some NATO exercises,” he tells me.

“We track these planes as best we can on websites. We photograph them. These are military planes. We have our own way of tracking these planes. It’s not just with cameras, we use software to track them. We believe they are involved in NATO exercises even though Leo Varadkar and all our Ministers promise us that the planes that land here have nothing to do with NATO.”

Shannon has served as a refuelling stop for warplanes and protests have taken place there ever since President George W. Bush began his ‘war on terror’ with the invasion of Afghanistan in 2001.

Most of the military flights since then have been to or from countries in the Middle East, including Iraq and Syria.

A decade ago, concerns were raised that Shannon was used for rendition or torture flights by the CIA.

In 2006, the Irish Independent reported that a cargo playing carrying Apache helicopters had landed in Shannon on its way to Israel.

In 2008, Irish activists became suspicious about a C-130 Hercules plane, normally based in Little Rock, Arkansas. They linked it to white phosphorous, a weapon known to cause horrific burns, which originated in Arkansas and was used in the bombing of Gaza.

Given Irish people’s traditional support for and empathy with the people of Palestine, such claims would alarm many Irish people in a supposedly ‘neutral’ country.

Few Irish people want to be associated in any way with war crimes.

But of course the peace activists have no proof.

Nobody does, because no inspections have ever been carried out on US military or contracted planes during their stopovers at Shannon.

Drawn To A Boycott