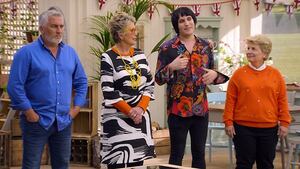 Too sweet? Not sweet enough? Or just right?

Let’s talk about first impressions, and again, I’m sorry to say it was about appearances again last night. Terry’s sick note really spoilt dessert week for me ‘cause before they’d even turned on their ovens I had already predicted that no-one’ll be on the Extra Slice  this week, and that had me vaguely wishing the show along just to see if I was right.

I’m still ticked off with meself ‘cause I really wanted this FrillBake to be sum’ting nice and fulla sugary melty chocolatie Kimmy Joy. Like we haven’t bin’ getting on lately, just thought t’would be a nice reminder that there’s some really other important stuff going on besides elections, and Brexit n’ the like.

Instead I could only think about my Nana Lulus carpet (in her good room) whenever Noel appeared or wonder if The Hollywood had put on a few. At least Manon obliged by leaving the earrings at home, and the weekend in the tent became all about hair plaits. And yellow eyeshadow.

Anyway lads, do yer best to give Dessert week a guilty smile instead’ve a snort. And before we get to it, they’re turtles not trolls.

I think most home bakers have a dessert Signature that is not just a fruit tart. Ye might remember this oul’ reliable , of mine, even though I’ve been promising to try a lime curd kiwi & pineapple one since Tom Parlon was a TD.

My takeaway from last night’s Roulade challenge was Rahul’s rhubarb and custard, and my running favourite Dan got his third Hollywood handshake in a row. Which I can’t remember happening before, but he was Star Baker there and then, and probably should be given a monument inside the tent.

Sum’ting else about Dan, he uses basic everyday ingredients most of the time and he hasn’t needed chemistry, exotic teas or foodie techniques to get those handshakes.

He is the very definition of a proper family home baker, here I’d do this meself but since I’m the only one in my house that eats coconut I’d only make a pig of meself.

Also, the great thing about having Roulade as your own Signature is that it will always be what Jon called rustic looking, and icing sugar will always be your best friend, so you’re never under pressure to have it looking like it came from the Butler’s Pantry lot.

They were being a bit too fond of judging the swirl for me. Its dessert so don’t worry about the swirl, its all about the filling and having seconds; if its full spiral your after you’ll have ta’ reduce your creamy tangy good stuff.

The technical was the technical. Meh for Blancmange but if ye fancy it, Prue’s recipe is easy but loads of ingredients t’ be fecking around with, like Green Cocoa Butter. Yep. Green Cocoa Butter, for biscuits that last a second and involve eight different ingredients, and piping. But it is a good one if you’re baking as a quality time with kids thing.

Last place Manon just asked for it earlier on when she uttered she hadn’t messed up a bake so far.

Ah the Showstopper. Now a bitt’ve tale here. When they trailered it, I was heard saying sum’ting like ‘I would no more be arsed’ … like fecking around with a chocolate dome only to melt it before ya can get to your afters. But the dependent was a bit too quick with the snark herself; it must be the weather now that I think of it, at home as well as this gaff.

Anyway, I got a bitt’ve ‘you’d have to give it a go first and see can you do it before deciding you’re not being arsed’ (pronounced aursed.) Yep, getting it everywhere lately.

But wasn’t it great tho’ ? Like none of the bakers really made it look painful or too fancy with kit and techniques; a balloon was used for this. Shur’ it doesn’t matter if it melts and cracks. I’m definitely going to give one a go over the Christmas. Like for a group. Maybe the Broadsheet Christmas do, and I would probably do something like Kim Joys Turtle Astronauts …troll truffles, with bitter orange sauce.

Ah I’m only messing. I still love ye all.

Here, one thing before ye start separating yere yolks, Kim Joy was hard done by not t’get herself a Hollywood Handshake, but I reckon she’ll be there or there abouts in the last 2 weeks.

Star Baker, no need to mention. But its worth noting that three of the last four Star Bakers were lads.

So hopefully I learn something new to do with my favourites, nutmeg, cinnamon and cloves; and there’s a bit more to Spice than gingerbreads.

28 thoughts on “Just Desserts And An Awful Shirt”