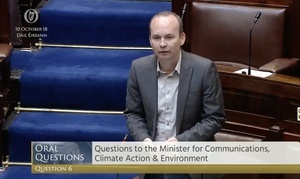 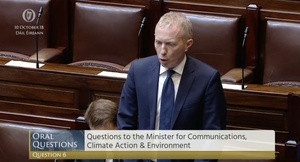 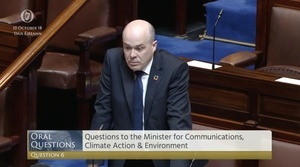 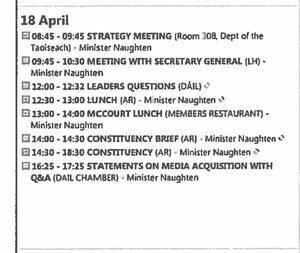 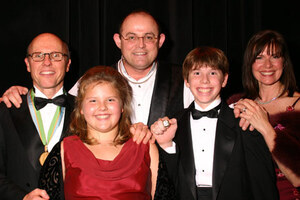 Communications Minister Denis Naughten has just confirmed in the #dail that he “facilitated” a lunch for the daughter of David McCourt (the sole remaining bidder for the NBP) in the Oireachtas members' restaurant on 18 April.

Naughten insists he did not attend the lunch.

From top: Paul Murphy, Timmy Dooley and Denis Naughten; The McCourt family with tenor Ronan Tynan at a gala in New York.

On mature récollection 30 mins after this interview apparently @DenisNaughten paid the bill !!!!!! No such thing as a free lunch 🥗 pic.twitter.com/FRLeMTjyNk

Minister Naughten told journalists today that he had yet another meeting with David McCourt on June 28th yet I sought his June diary via PQ & it lists no such meeting. @MaryERegan @gavreilly @oconnellhugh @MichealLehane @peterodwyer1 https://t.co/LSXIbaylVI

A spokesperson for the the Minister for Communications has said Denis Naughten did pay for lunch for a businessman involved in the tender for the National Broadband Plan.

The lunch for David McCourt and his daughter cost €37 and it was deducted from Minister’s Naughten’s salary in July under the Oireachtas payments system, the spokesperson said.

Following journalist Gavin Sheridan, of Right To Know, discovering, under the Freedom of Information Act, that, according to his diary, the Minister for Communications Denis Naughten was scheduled to meet with David McCourt for lunch in Leinster House on April 18, 2018.

April 18, 2018 was the same day Minister Naughten answered questions in the Dáil about Independent News and Media’s proposed takeover of Celtic Media.

Minister Naughten told the Dáil this morning he didn’t meet him for that lunch.

Instead, he said Mr McCourt was in Leinster House that day to celebrate a birthday – while he and his family were in Dublin.

Mr McCourt is founder and chairman of a private investment firm called Granahan McCourt – which is leading a consortium that is the only bidder for the National Broadband Plan contract.

Last week it emerged that David McCourt, of Granahan McCourt, met with the Mr Naughten in New York last July.

And yesterday it was shown that Mr Naughten, at this meeting, flouted his department’s own protocols regarding contacts between bidders and the state.

From the Dáil this morning:

Whether or not you joined him is a matter for you to clarify to this house. I want to know what the purpose of that meeting? Why you arranged the meeting? Was it your intention to have officials present? What was the expected outcome from Mr McCourt’s perspective?

And why in God’s name did you allow yourself to be embroiled, yet again, on the very day that you were explaining to this house why you had inappropriately involved yourself  in the Celtic Media controversy?”

Denis Naughten: “No, I did not attend the lunch, is the first thing. Second thing is that my understanding is that Mr McCourt and his family came in for lunch that day, to celebrate a birthday.

“Yes, the booking [for the lunch in Leinster House] was made under my name. I didn’t speak with David McCourt either in person or on the phone or any other way that day or subsequent days in relation to that.

“I facilitated the family coming in to Leinster House as many colleagues do here and I didn’t have any engagement whatsoever with David McCourt.”

On Monday, Social Democrats TD Catherine Murphy asked for time to be set aside in the Daáil to allow for Minister Naughten to answer questions about his contact with Mr McCourt and the tendering process for the National Broadband Plan contract.

All requests were declined.

“It is interesting that the Minister, despite prolific spinning and semantics about his various dinner dates with David McCourt and family, has not defended his flagrant breach of his own Department’s protocols.

I believe he has not addressed this issue because there is no way for him to do so without acknowledging that he has, without question, broken the specific rules governing the tender process and has therefore fundamentally compromised not only the process but himself and his Ministerial office.

I have reiterated my request to the Business Committee that the Minister be brought before the Dáil tomorrow to make a statement and to take questions on the issue.”

“We know from a parliamentary reply to me that Minister Naughten briefed Taoiseach Leo Varadker in September 2018 and so I think it’s important that we hear if the Taoiseach was made aware at that stage of the Minister’s repeated breach of the protocols throughout the process.”

Previously:  ‘Any Sniff Of Impropriety Or Bad Governance Must Be Met With Robust Questioning’

“I Didn’t Wilfully Or Any Other Way Mislead The Dáil”

59 thoughts on “The Birthday Party [UPDATED]”