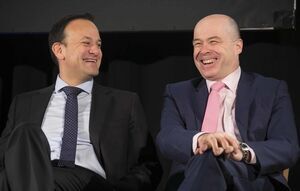 WATCH: An Taoiseach @campaignforleo tells @IrelandAMVMT that optics of broadband controversy are problematic, but he is satisfied with answers from @DenisNaughten so far pic.twitter.com/OWLgGQ0jZX

Ireland AM on Virgin Media 1.

Leo Varadkar: “I can accept how the optics are problematic and perception does matter in politics and, of course, in business, too. But, as I said, Denis [Naughten] is going to be in the Dáil this afternoon. He’s going to clarify all those aspects and I’d like to give him the opportunity to do that first.

“You know, a lot of the time, people also jump to conclusions and rush to judgement and I wouldn’t like that to happen.”

Mark Cagney: “Do you have confidence in him?”

Cagney: “OK, so there won’t be a resignation any time soon? And if Fianna Fáil come looking for his head?”

Leo Varadkar: “Well…that’s up to them, obviously, I can’t speak for Fianna Fáil.”

“…Well I asked him [Naughten] to come and see me last night so actually, last night, we had a meeting, went through these issues, asked the kind of questions that you’re asking me now and he’s to come back to me with a few more answers.”

Mr Naughten will make a statement and take questions on his contacts with David McCourt in the Dáil at 3pm.

Populist Chancer Cheats Us All