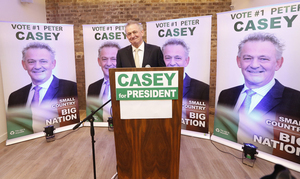 Kevin Doyle: “They are seen as a minority ethnicity.”

Peter Casey: “That’s a load of nonsense. You know. They’re not Romaning, Romanie, whatever, they’re not from Romany area.

They’re basically people that are camping on somebody else’s land. Imagine the poor farmer whose land that they camped on, you know, and who’d buy the land from him?

The neighbours in the houses all around, do you think they’re going, ‘this is great for my property value because I’ve now got three dozen caravans down the road’, you know. It’s just wrong, you know.

Somebody needs to sit up and say this is nonsense. And here we are are giving them luxurious houses and they’re turning them down because they want stables but they know that nobody else will move into the house, you see.

Can you imagine the brave person that would go, in Dublin that would go ‘I’d love a lovely four-bedroom house with solar panels and beautifully kitted-out kitchens’?’

Do you think they’d move in past all the travellers that are sitting out there waiting, watching them…not going to happen. They’re afraid of them.”

Presidential hopeful Peter Casey, speaking to Kevin Doyle of the Irish Independent on the paper’s podcast, ‘The Floating Voter’.

LISTEN: Presidential candidate Peter Casey believes Travellers should not be recognised as an ethnic minority (Independent.ie)

Previously: ‘What Are You Talking About?’

Meanwhile, Outside The Camden Court Hotel

96 thoughts on “That Seemed To Go Well”