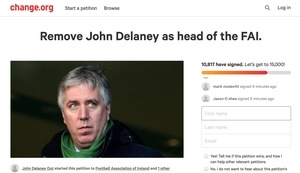 A petition calling for chief executive of the FAI John Delaney to quit on change.org

An online petition calling for the chief executive of the FAI John Delaney has secured more than 10,000 signatures.

The club that comes in first place in the League of Ireland receives €110,000 (Before Champions League and Europa League prize money). This is completely ludicrous and we demand that Irish football become a priority for development of domestic players instead of relying on English clubs to do all of the development for us.

The real solution is complete restructure of domestic football in this country, but removing the current (useless) head of the FAI is a great start.

Remove John Delaney as head of the FAI (Change.org)

‘I Think Most Irish People Would Say Fair Play To Him’