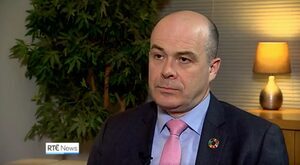 Former communications minister Denis Naughten has insisted that he did not attempt to interfere in the national broadband bidding process. | https://t.co/iUeiHLbstD pic.twitter.com/sbEkyu0vic

On RTÉ’s Six One News.

Naughten met with bidder to ‘keep them at the table’ (RTE)

Previously: Breaking His Own Rules

6 thoughts on ““The Rules Were Not Broken””