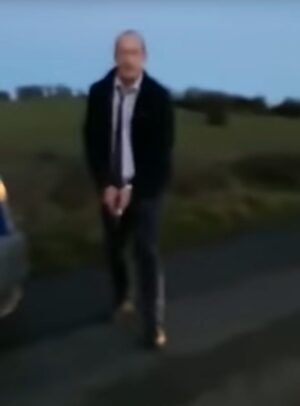 Shortly before 6pm, A garda allegedly helping a friend remove a van that the repairs on it hadn’t been paid for…When the man who repaired it tried to stop the van from being taken, the garda, shoving the man and his wife and when his tie was grabbed, raised a pistol and shot the man having already allegedly shot and killed his dog…

‘The Garda Síochána Ombudsman Commission is to investigate the circumstances of a shooting incident at a house in Co Longford yesterday after a man was injured when a garda firearm was discharged.

Gardaí say they were at the scene as part of another investigation and were being assisted by a member of the public when they were confronted.

In the moments that followed a garda discharged his firearm in the direction of a guard dog, which was killed and a man nearby also sustained shotgun wound injuries to his leg.’

Usual health warnings apply to the veracity of the above text.

The dog at the centre of a garda shooting – previously thought dead – has vanished and investigators are trying to track down the injured hound.

The Garda Siochana Ombudsman Commission (GSOC) and garda investigators are probing the shooting of a man in Longford by an on-duty Detective Sergeant.

Witnesses said that a large German Shepherd was shot during the incident.

Sources have said that the dog is missing, having run from the scene.

….The site of the incident is close to a location where €500,000 of suspected stolen industrial plant, tools, trailers, vans, cars engine and vehicle parts was recovered.

123 thoughts on “Meanwhile, In Longford”