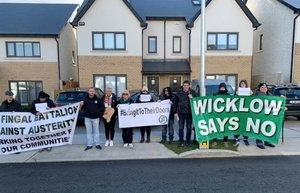 Members of ‘Fingal Battalion Direct Action’ stage a small protest outside the County Wicklow home of Minister for Health Simon Harris before being peacefully moved on by two members of An Garda Síochána.

‘We believe that Minister Simon Harris’ actions have been affecting people all across the country in their home, so we are bringing it to his home’ under the tag #BringItToTheirDoors on Facebook

#BREAKING: Health Minister Simon Harris is trapped inside his Wicklow home along with his wife and newborn baby by “anti-austerity” protesters. More on @Independent_ie

This is despicable – Simon Harris and his wife have a new baby. https://t.co/Zxo0mGzpQY

Did they miss MASS?

On The Verge Of ANARCHY

59 thoughts on “Meanwhile. In Wicklow”