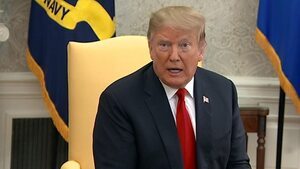 ‘Many Democrats had invested such hope in Mueller as the saviour who would topple Trump that their reaction to Barr’s conclusions reeked of disappointment. That’s understandable, but perhaps Mueller has done them a favour.

His report will no doubt reveal more unsavoury details about Trump and his campaign. A finding of criminal behaviour risked plunging the US into total political paralysis, with the Democrats going all-out for an impeachment that Republicans would not allow to occur – in the process feeding Trump’s victim complex and exciting his base in time for the 2020 election.

It’s important that Trump does not have a second term. But it would be infinitely better to have him rejected by the people at the ballot box. The conclusion of Mueller’s investigation will force Democrats to focus on the task at hand: how to convince enough Americans that their president is unfit for office and must be replaced.’

Editorial in this morning’s Irish Times.

Via  Sharyl Attkisson in The Hill’

‘Whatever his supposed flaws, the rampant accusations and speculation that shrouded Trump’s presidency, even before it began, ultimately have proven unfounded. Just as Trump said all along.

Yet, each time Trump said so, some of us in the media lampooned him. We treated any words he spoke in his own defense as if they were automatically to be disbelieved because he had uttered them. Some even declared his words to be “lies,” although they had no evidence to back up their claims.

We in the media allowed unproven charges and false accusations to dominate the news landscape for more than two years, in a way that was wildly unbalanced and disproportionate to the evidence.We did a poor job of tracking down leaks of false information.

We failed to reasonably weigh the motives of anonymous sources and those claiming to have secret, special evidence of Trump’s “treason.”

As such, we reported a tremendous amount of false information, always to Trump’s detriment.And when we corrected our mistakes, we often doubled down more than we apologised.

We may have been technically wrong on that tiny point, we would acknowledge. But, in the same breath, we would insist that Trump was so obviously guilty of being Russian President Vladimir Putin’s puppet that the technical details hardly mattered.’

Stuck In The Middle