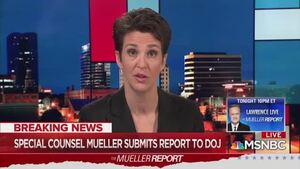 Heroic Ode for The American Resistance

(for CNN, MSNBC, The New York Times & all those
who hoped the Mueller report would be the thing)

Rather than fight the man-child from Orange
on the metres deep concrete of his actual crimes,
you did battle with your size twelve dress shoes
gallantly planted in quicksand – just now grown suddenly
ravenous – or failing that in the largest serving
of Jell-O and ice cream since Christopher Columbus
showed up to tell America he’d discovered it.

Given the chance you’d have stood pluckily before the jury
and – neglecting to mention the shortcomings
in his approach to childcare – accused
Josef Fritzel of bad carpentry; courageously focused
on Elizabeth the First’s bald patch and not her public
disembowelling of her critics; fearlessly
taken issue with Peter Sutcliffe’s driving
and not what he did to those women
with his menu of hammers and screwdrivers;
dared take to a radio talk show to criticise the late Adolf Hitler
for his side parting and inability to gather a crowd,
and told the plebs it’s time Franz von Papen rode to their rescue.

You who heroically blew the bags of Dollars mom and dad invested
putting big ideas into your little skull by trying to convict this wolf
temporarily taken human form of eating the one sheep he didn’t.

This is the KEY to #RussiaGate. @JohnBrennan used British Intelligence- GCHQ – to get around Constitutional protections and illegally spy on @realDonaldTrump and his team. https://t.co/Crq6u8dHLp

31 thoughts on “No Treason To Be Cheerful”