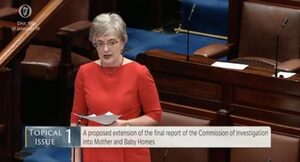 Minister for Children and Youth Affairs Katherine Zappone is expected to bring two reports concerning the Mother and Baby Home Commission to Cabinet tomorrow – to seek its approval to publish them.

The Fifth Interim report is expected to focus on burial arrangements made for women and children who died while living in the institutions under the commission’s remit.

It’s also expected to include technical reports prepared on the burial site associated with the former Bon Secours Mother and Baby Home in Tuam, Co Galway and the commission’s assessment of burial arrangements at the other institutions within its remit.

Previously: ‘Delay, Obfuscation And The Blurring Of Boundaries’

‘One Of The Lowest, Dirtiest, Most Mean Spirited Political Tricks’