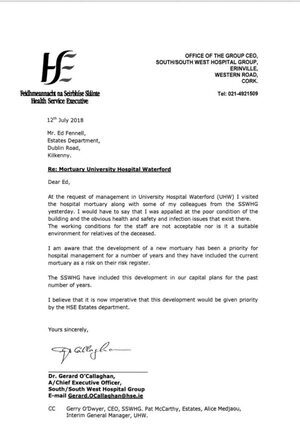 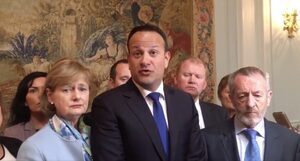 I have reported multiple structural deficiencies in our health service over 26 years-verbally, in writing, in the media and in the Seanad. I have NEVER done it via an incident report. Inappropriate mechanism. Taoiseach please apologise to the pathologists.

This morning, The Irish Times, reported that, last July, group chief operations officer in the South/South West Hospital Group Dr Gerard O’Callaghan sent a letter to the HSE saying he was  “appalled at the poor condition” of the University Hospital Waterford’s mortuary.

He also told the HSE there were “obvious health and safety and infection issues” at the mortuary. He sent the letter a day after visiting the mortuary.

This follows a press release from the SSWH group earlier this week stating there was “no evidence” to support claims made about the mortuary by four pathologists last October and that no staff member ever made any complaint about the mortuary’s conditions.

It also follows Taoiseach Leo Varadkar saying “no evidence has been brought forward to support” the claims – as reported by journalist Darren Skelton, of the Waterford News and Star.

The four pathologists claimed that the conditions at the mortuary are so bad “most bodies lie on trolleys in corridors, often leaking body fluids onto the floor”.

‘I Didn’t Want To Be Calling Any Staff Member Dishonest’

15 thoughts on “‘Obvious Health And Safety And Infection Issues’”