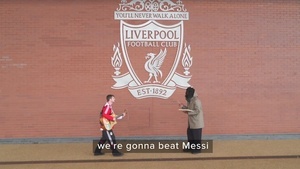 A one off never to be achieved again, we thought.

UNTIL last night when the genius came up [on US sports site Bleacher Report] with what can only be described as divine inspiration.

Thanks to the possibility of Kevin been able to tune in to another dimension for fortuitous inspiration, Liverpool have got to another Champions League final and their first premiership title in 31 years now also seems possible.

Previously: May God Have Mersey On His Soul

12 thoughts on “Richy Writes The Future”