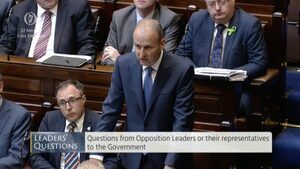 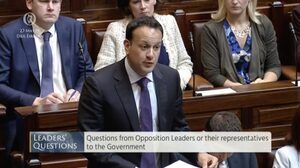 Fianna Fáil leader Micheál Martin raised what he called “the shifting sands” in relation to the composition of the consortium which will be responsible for delivering the Government’s National Broadband Plan.

In particular he drew attention to the relationship between Granahan McCourt, owned by US billionaire David McCourt; Tetrad Corporation; and McCourt Global, which is owned by David McCourt’s billionaire brother Frank McCourt.

In doing so, he claimed the Government hasn’t been fully transparent about the financial guarantees from different entities which will underpin the project.

Mr Martin’s comments followed Justine McCarthy, in The Sunday Times, reporting at the weekend that McCourt Global were denying that they had involvement in the broadband plan, despite the Minister for Communications Richard Bruton saying they did last week.

Prior to last weekend’s report, Ms McCarthy previously reported that Frank McCourt was also at a dinner meeting that the former Minister for Communications Denis Naughten held with David McCourt in New York in July 2018.

“After repeated attempts to contact him [former Minister for Communications Denis Naughten] last week, Naughten said on Friday that he would reply by email to questions about his interactions with Frank McCourt. He has not done so.”

Mr Varadkar told Mr Martin today that he was “weaving one of his many conspiracy theories”.

But he said, last night, in a further written reply, it emerged there will only be two investors – Tetrad Corporation and Granahan McCourt.

“And we’re also told, Deputy Dooley was, that Tetrad provided a commitment in relation to the equity only required for the project. In other words, they will contractualise a legal underpinning of €175million from the lead bidder – a far cry from the €2.4billion Taoiseach that you gave the impression in the House some time ago that they would be putting in.

“There is no legal lein from what we can see on that at all.”

Mr Martin went on to raise the dinner meeting between the then Minister for Communications Denis Naughten and US business man David McCourt in July 2018 in New York, and the minutes of the same.

“Taoiseach, in hindsight, I would put it to you that that meeting held on 16th of July, 2018 in New York, between former minister [for communications Denis] Naughten and David MCourt, Frank McCourt was actually quite significant.

“It was a month before the deadline for guarantees of financial underpinning and the consortium had to be submitted. The deadline was August 15th.

“Four serious issues were discussed in relation to the project. We know that there was a need for a permanent Irish-based leadership position, the importance of the 15th of August 2018 deadline and the need for the necessary financing to be in place at the time. This deadline will be met, the minutes say.

“‘The need for any changes in the make-up of the consortium to be avoided or, if necessary, to be kept to a minimum’. ‘The importance of this issue is understood by the consortium which has been advised by Arthur Cox that as long as the consortium’s lead bidder remains unchanged, such changes should not necessitate any delay’.

“And there’s been an impression since Taoiseach that McCourt Global have been in this from the very beginning. McCourt Global are saying they weren’t involved in this, in any shape or form. And Frank McCourt was at that meeting, Taoiseach.

“Minister Naughten had to resign, he’s been less than forthcoming. He’s gone silent, he’s not available to comment on this. And I’m putting it to you Taoiseach that it’s extremely important that you would talk to the former minister and get him to give a comprehensive, transparent statement in terms of all of these meetings.

“You might confirm to me, Taoiseach, did Peter Smyth [who reviewed the plan’s process last year and found meetings Naughten had with McCourt didn’t influence the process], during his inquiries speak to Frank McCourt?

“Where will the ultimate liability fall if the plan fails? Or if Granaham McCourt Dublin Limited folded – would it fall on Tetrad Corporation to provide the equity on the National Broadband Plan?”

In response, Taoiseach Leo Varadkar said there was nothing new in what Mr Martin said and that it was well known that the consortium had changed for many months.

“I wasn’t at that dinner [in New York]. No current member of Government was at that dinner. Minister Naughten was, I can’t answer questions on his behalf but I am confident that all of this was covered in the independent report done on this matter carried out by Peter Smyth some months ago and that’s published and in the public domain.”

“In relation to the financial guarantees, National Broadband Ireland will make available €220million in equity and working capital upfront. This will be legally required by the contract which is being finalised. There is no upfront contribution from the taxpayer. The taxpayer only contributes after the fibre is deployed, homes are passed and subsequently connected.

“The total cost of the project is between €5billion and €6billion, including VAT and contingencies with roughly half coming from the State in the form of the Exchequer subsidy and the other half from the investor and commercial revenues.”

“In terms of the upfront contribution – €175million comes from Tetrad Corporation and the rest from Granahan McCourt Dublin Ireland Limited. The funding commitments will be contractualised in advance of the contract award…”

“I understand the department has now corrected the record and clarified any confusion in relation to McCourt Global’s role. It’s role, as I outlined to the Dail last week, is one of two entities relied on for pre-qualification.

“They provided a letter of support. At final tender the equity commitments were provided by Tetrad and I’m sure Minister Bruton will be happy to clarify any further issues or to answer any further questions in this regard.”

Mr Martin said Mr Varadkar’s respond was unsatisfactory and that the information had been “dragged” from him.

He also said that, as for Mr Varadkar’s assertion that the record was corrected, this only emerged last night in PQ replies.

“You can’t go on being as detached as you are. A former minister responsible for this project and this tender met with the preferred bidder on a number or occasions.

“And we were led to believe they were all innocent dinners – ‘ah sure, we’re just having a personal lunch’. They were not, come off it, Taoiseach.

“You can’t stand up here as Taoiseach of the country and say ‘no one in the current Government is involved’. For God’s sake, he was a former minister with you. You still depend on him for support.

“Frank McCourt, of Global McCourt [sic], was at that dinner and they weren’t there talking about the weather.”

“…You pretended you saw no evil until all the other dinners emerged and then Denis Naughten fell on his sword. Denis Naughten, the former minister, has an obligation to talk to the House and tell us everything that took place in relation to this.”

“You’re confusing the [inaudible] deliberately in my view, at this stage. What are you hiding in relation to the relationships between GMC and Tetrad and Global..”

“The fact that Deputy Naughten attended those dinners is old news. It’s been in the public domain for many months, we knew that last year. Deputy Naughten resigned from Government over six months ago and we used the interim period to make sure that this bid was sound and that it was the right one to go forward with. And an independent report was done by Peter Smyth, as the independent auditor, dealing with all these matters.”

“Ceann Comhairle, the deputy really needs to calm down here. The Government has been very transparent on this matter.

“What’s happening here is, once again, once again, Deputy Martin is weaving one of his many conspiracy theories.”

‘We Owe It To Make Sure That Justice Is Done’

8 thoughts on “‘They Weren’t There Talking About The Weather’”