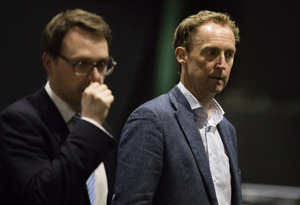 The Dublin count of the European Election was suspended following a dispute over transfers between candidates Independents4Change Clare Daly (top centre) and Fianna Fáil’s Barry Andrews (above) and will resume at 11am.

Green Party’s Ciaran Cuffe and Fine Gael’s Frances Fitzgerald have already been elected in Dublin. Brexit means Dublin gets an additional MEP  and whoever wins between Mr Andrews and Ms Daly would only become a full MEP after Britain’s withdrawal.

Part of the disagreement centred on whether [Sinn Fein MEP] Ms [Lynn] Boylan’s vote should be distributed after [Soc Dem[ Mr [Gary] Gannon – something Ms Daly argued was “very clear” under new legislation and, she contended, was an approach being followed in the Ireland South constituency, which also has a Brexit seat.

That dispute has raised further questions about how the count was conducted – including whether the surpluses of Ms Fitzgerald and Mr Cuffe should also be counted.

After detailed discussions between the Returning Officer and the two parties – both of whom had legal advice – Mr Gallagher suspended the count.

However, there is no certainty that the issue will be resolved to everyone’s satisfaction – which raises the possibility, it could end up in the courts.

Daly, Andrews in dispute over transfers at Dublin count (RTÉ)

However, Mr Reilly highlighted that this wasn’t what Mr Phelan told the Seanad on March 6:

‘The UK Is Not Even A Neutral Country. We Are’