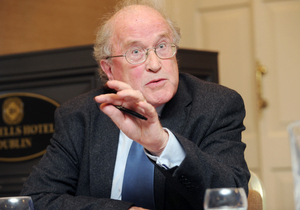 You conclude an article (Boris Johnson is the fool who would play the king, June  18) attacking Boris Johnson in the “Irish Times” by asking “Who better to speak for a reckless and decadent ruling class for whom everything is desperate but nothing is serious?”

This implies that you believe that the British “ruling class” backs Brexit, but is that really so? And are “reckless” and “decadent” really the apt adjectives?

I would have thought that the real situation is that what one might broadly term the British “ruling class” has up to now been predominantly supportive of “Remain”, but that the majority of UK citizens who voted to take back control of their law-making from Brussels by backing “Leave” in the 2016 referendum gave democratic legitimacy to the minority of the ruling class which favours Brexit.

It is this popular democratic vote that legitimises Brexit and it is presumably the reason why your own newspaper and many others who do not like Brexit want a second referendum in the hope that it will overturn the result of the first, as was done here with Nice Two in 2002 and Lisbon Two in 2009.

The economic side of the British ruling class – namely the City, the CBI, High Finance and Big Business generally – overwhelmingly backed “Remain” in the 2016 referendum and largely do that still.

The political side – namely Prime Minister David Cameron’s Government, most Tory Ministers and MPs at the time, plus their Blairite opposite numbers in the Labour Party, plus the senior British Civil Service, were also “Remainers” and many still are, although the more democratically minded among them realise now that, with the departure of Theresa May, they must accept and implement the referendum result or else see the electoral destruction of the Tory Party, the principal party of Britain’s “ruling class”.

Of course one might also say that Britain’s ruling class is to some extent divided on the EU and always has been.

When the UK first applied to join the then EEC in 1961 Labour’s Hugh Gaitskell criticized the Tory Harold Macmillan for proposing to abandon “a thousand years of history”.

Later, in the 1973-5 period, the Tory Enoch Powell and Labour’s Tony Benn opposed Edward Heath and Harold Wilson as they brought Britain into the EEC and kept it there.

I shared No-side platforms with the Tory Sir Richard Body and Labour’s Peter Shore and Tony Benn at various meetings in London during Harold Wilson’s referendum on staying in the then EEC in 1975 – the first ever UK referendum – when two-thirds of those voting voted to remain in the EEC.

At that time that there were only two major British journals backing the No side – the communist party “Morning Star” and the Tory weekly “Spectator”. The rest of the media, from “The Sun” to the “Financial Times”, strongly favoured staying in the EEC.

As I expect you know, it was the USA that originally fathered Eurofederalism. The first supranational community, the European Coal and Steel Community of 1951, was pushed by the Americans as an economic underpinning of NATO in Europe and to reconcile France to German rearmament at the start of the Cold War.

The CIA financed the European Movement for years. Later John F. Kennedy pushed Harold Macmillan into applying to join the then EEC following the 1956 Suez debacle.

In so far as the British “ruling class” had independent ambitions at that time I would say that it hoped that by joining the EEC it would either divide France from Germany or else be co-opted by France and Germany into a triumvirate that would help run “Yurrup”, as Edward Heath used call it, together.

Disillusionment at the failure to achieve either of those objectives is surely one of the elements in Tory rejection of the supranational EU “project”.

May I respectfully suggest that “Irish Times” readers deserve a more sophisticated analysis of the reasons for the shift in British “ruling class” and popular attitudes between 1975 and 2016 than to ascribe that change to press columns by Boris Johnson.

And what is the Irish Government’s contribution to the current state of Anglo-Irish relations?

As Ray Bassett has pointed out, Taoiseach Leo Varadkar’s intransigence on the issue of a time-limit to the North-South ”backstop” in the hope that this could be used to scupper Brexit altogether, has helped to get rid of “Remainer” Prime Minister Theresa May and hand the leadership of the Tory Party to one of the Brexiteers., while damaging underlying Anglo-Irish relations for possibly a long time.

Can our own “ruling class” not give better leadership to the country than this?

This year’s Reith Lectures are by Jonathan Sumption. In the 4th and final lecture on constitution and whether or not the UK would be better off with a written constitution (He argues it wouldn’t, Welsh, Scottish and Northern Irish devolution would have been harder to implement.) he ends as with all the lectures with a question and answer section with the audience, resulting in the following piece of beauty. Page 9 at this link, in which Mark Reckless, yes the one and the same is put back in his box.Considering the scaremongering nonsense that was written to Fintan O’Toole, (above) I thought it might be an additional addendum…