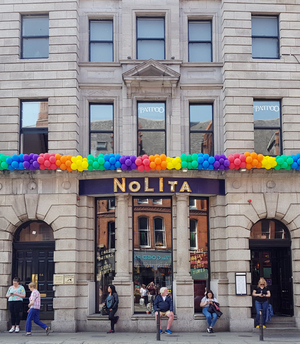 To be quite honest, I don’t remember which format and that, ladies and gentlemen, is the vagueness of the attention span one has when you have a hand-held screen which bombards you with information at a pace far faster than the human brain has had the ability to adapt to.

Now, it must be said that as I write this it is only day three but I feel liberated.

I’m a 30 year-old, below average fitness-level gay working in a fairly high-stress environment and living in Dublin.

I dropped out of University in my final year and stumbled through the recession in a low level, low income job, making no real progress with my life but committed myself to this job out of feeling worth nothing more for myself.

I had failed but I’m from a long lineage of people who are quite frankly very hard on themselves.

It took a failed long term relationship for which i had poured all my energy into (and I’m going to come back to this energy because it’s something I’d like to discuss) for me to realise that I had completely lost myself.

I was a closeted gay in a county, staunchly Catholic, secondary school. I took a hell of a lot of abuse in my years listening to all the homophobic shit: “gay” was the derogatory term of choice.

I’ll always remember the only time I heard someone defend gays and I’ll forever love her for it. It was upstairs between the chemistry and biology lab and I remember it like it was yesterday.

I’ll also – even though we fell out irreparably in later years – will remember the girl who stood up for me on the bus. Big shout out to Squishy.

I don’t actually harbour resentment for the homophobic bullying. I was harbouring guilt and shame and taking an emotional beating upon myself.

Nobody knew me because I was affording nobody myself, including myself. I was something to be kept hidden, even from myself.

Coming out a month before the Leaving Cert to my parents and a select few so, they could deal with it “whlie I had to study” was one of my smartest choices in life. Which is also one of the only real things I have ever done for myself.

One thing has been with me throughout all the years. Social Media.

It gives my age away but Bebo had quite a large following and I was there when it started during a really important part of my development.

And I have questions. I have serious questions on the accountability of social media on the energy it takes from us.

Think about this for a second, I have had a social media presence since i was, what, 14?  In fairness I’d had whiskey and smoked a fag in the local teenage disco by then and tried to be macho to the sounds of Gigi D’Agostino.

I also was that child that went home to try find and download the songs i liked on – I’m gonna say Limewire but i’m fairly sure it was a different app, on dial-up with a phone cable stretched over to the PC across the hallway. It would also have been the same year I took up bleaching my strawberry blonde hair.

Now, as far back as I remember. I have struggled with anxiety and bouts of depression

And up until three days ago a very large portion of my days were spent in negative feedback cycles between my anxiety, my depression and that handheld screen with insert name of social media company not paying tax in Ireland, a company,

If someone came up to you on the street; a complete stranger and asked you for the amount of personal information we dispense freely; hourly, to corporate strangers; you would, probably smack them.

I would postulate that we are giving much more than our information away. We devote our energy to social media, we devote an energy to an image of us that we ourselves would like.Why? Really, why. What is the point in it?

Maybe it always has, and maybe it’s actually time for me to just be, perfectly entitled, and proud to be myself.

No comparing, no seeing what someone who I haven’t spoken to in years had for breakfast, no offence to your breakfast love I hope it was delish but why should I give a fuck? Was I invited there to eat it or did I invite you over for the same?

No. And if when i bumped into you and you showed me a  picture to me of the breakfast you had I’d probably cross the street next time I saw you again.

How much energy do we spend airing our inner voices out into this man made platform to bounce around between other man made caricatures of who we would like ourselves to be, instead of… I dunno, building the houses with all of our screen time instead of putting our energy into giving out about it.

Imagine a company that can influence the masses with pieces of code and maths, they pay sweet fuck all tax, and when you get angry tell it, you tell it everything else about yourself too.

A device that is designed for you to not only communicate but to compare yourself to others, which promotes negative thinking, promotes self esteem issues, promotes conformity, incites depression and anxiety, breaks you down slowly taking all this energy from you.

And what else could we as human beings, be spending all this energy on?

Ourselves would be a good start. For now, for me that energy is going into me, and the people who chose to be near me.

The author has asked to remain anonymous

A Sigh Is Just A Sigh

10 thoughts on “Pride For Myself”