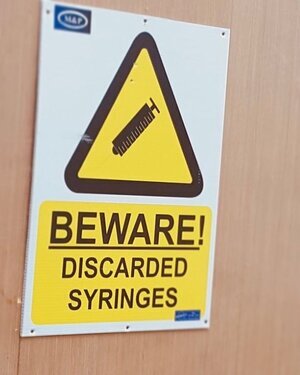 This sign has been placed up on a wall in a lane way in Dublin City centre. Further highlighting that street-based injecting is still a problem in the capital. Supervised injecting facilities will reduce this problem and keep us all #SaferFromHarm.

In February 2018, the HSE announced that Merchants Quay Ireland was the preferred operator of Ireland’s first Medically Supervised Injection Facility.

MQI has previously said it believes up to 60 people will use the facility daily – when it becomes operational.

The facility will be part of its renovated Riverbank centre on Merchant’s Quay and the organisation recently gave additional information to Dublin City Council as part of its planning application for that renovation.