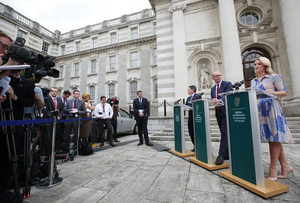 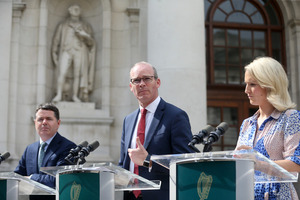 Above from left Fine Gael Minister for Finance, Paschal Donohoe with Tanaiste & Minister for Foreign Affairs and Trade, Simon Coveney and Minister of State for European Affairs, Helen McEntee talk to the media about the Government’s plans Brexit preparations.

The Goverment’s Contingency Action Plan Update acknowledges there is a “high degree of uncertainty” about forecasting the impact on Ireland.

But it adds the impacts in the first year following a no-deal would be “very damaging”.

It adds the impact of UK import and export exposure for firms could be compounded by currency volatility between the euro and sterling.

It repeats that there would be an expected increase in unemployment of 50-55,000 after the UK leaves.

17 thoughts on “Any Highlights?”