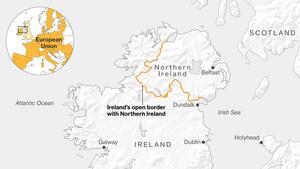 Border between Republic of Ireland and Northern Ireland

Ireland is set to acknowledge publicly for the first time the need to set up checks at or around its border with Northern Ireland in a no-deal Brexit scenario, people familiar with the matter said.

The government will accept that checks, especially on livestock, will be required at least close to the frontier if the U.K. crashes out of the European Union when it publishes no-deal contingency plans on Tuesday, the people said, asking not to be identified because the plans haven’t yet been discussed with cabinet.

…The European Commission has pushed the Irish government to lay out its plans for the border in a no-deal Brexit, a person familiar with the matter said earlier this year. Ireland was proving elusive when the Commission has attempted to pin down the government on its plan, according to the person.

^ I understand Govt Buildings are quite exercised at the contents of this Bloomberg piece. One Govt source says it is, and I quote, “bollox”.

In respect of its article, Bloomberg has added:

“The location of any checks is still to be determined, one of the people said.

“An earlier version of this story said the government would accept that checks would have to be at or close to the border.

“A spokesman for Foreign Affairs Minister Simon Coveney said that was “incorrect.” Updated contingency plans will be published in full later Tuesday, after the cabinet has had its discussion, the spokesman said.”

How Do We Get Around This?

32 thoughts on ““Ireland Was Proving Elusive””