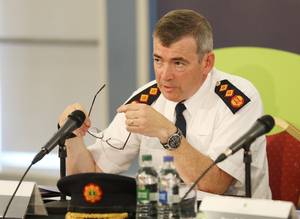 From top: Garda Commissioner Drew Harris; Brothel Keepers; a campaign seeking safety over enforcement in the policing of sex workers.

We (a collective of sex workers and allies) are beginning a new campaign today, calling on the Garda Commissioner to immediately adopt policing policy which prioritises the safety of people in sex work over enforcement.

We have produced a website detailing official statistics on brothel keeping and with an analysis of 82 cases (involving 165 individuals) of sex workers convicted of brothel keeping over the last decade.

We would like to especially draw attention to the summary key findings in our Analysis section here.

As of today we are collecting signatures for a formal group letter to the Commissioner.

We have written to the Commissioner today to advise him that we are beginning this campaign.

Lucy Smyth, of UglyMugs.ie (a member of the Brothel Keepers collective).