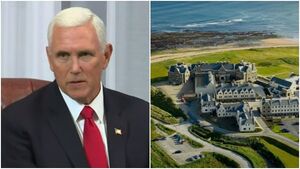 .@VP chief of staff Marc Short says Trump didn’t order Pence to stay at a Trump resort in Ireland, but rather offered it. “It’s like, ‘Well, you should stay at my place,” Short said Trump told Pence.

Outrageous!! Pence wl b staying at Trump’s Doonbeg luxury golf course in Ireland even though he has mtgs in Dublin across the country a 3 hr drive away. Lisa O’Carroll, of The Guardian, tweetz:

US ambassador to Irl Edward Crawford and Irish Ambassador to US Dan Mulhall Look on as Pence and Higgins sign book in SILENCE. If it wasn’t for the sound of photographers you’d have heard a pin drop. 5 thoughts on “And Add The Halfpence To The Pence”