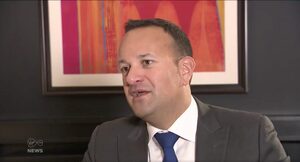 NEW: Leo Varadkar tells @VirginMediaNews that – despite him saying in Dublin on Monday that he wouldn’t – the UK is required to operate border checks in a no-deal Brexit. A WTO Brexit means following WTO rules, he says: pic.twitter.com/cfGVrAxvrc

(The ‘him’ in this case is Boris Johnson, whose name I stupidly omitted)