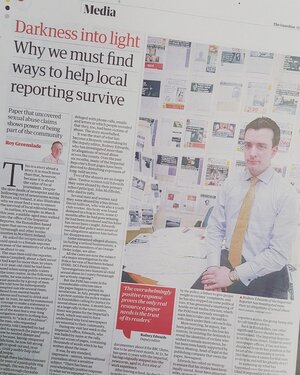 Roy Greenslade, in The Guardian, writes:

“…in March this year, a middle-aged man walked into the office of the Impartial Reporter, the Enniskillen-based paper that serves the people of Fermanagh and other border counties in Northern Ireland.

“He asked the receptionist if he could speak to a female reporter because of the sensitivity of what he was about to say.

“The man then told the reporter, Jessica Campbell, about a dark secret he had kept for more than 30 years.

“As a 12-year-old child he had been abused when using public toilets in the town centre. In the following months, he was subject to a series of sexual assaults by a group of men.

“…Although there had been rumours down the years of a paedophile ring in Fermanagh, this was the first evidence with enough checkable detail for the paper to feel confident about publishing the story.

“The reaction astonished the Impartial’s staff. The paper was deluged with phone calls, emails and letters in which people revealed that they, too, had been victims of abuse. The story snowballed.

“It was the start of what has become an Homeric undertaking by the deputy editor, Rodney Edwards, who has investigated more than 50 allegations of historic sexual abuse across the county.“

Here’s why local journalism must find a way to survive (Roy Greenslade, The Guardian)

2 thoughts on “The Story Of How”