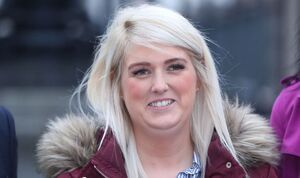 Sarah Ewart and Amnesty International have won a landmark case in Belfast’s High Court today, as judges found Northern Ireland’s strict abortion law to be in breach of the UK’s human rights commitments.

[This case was launched following a UK Supreme Court judgment in June 2018, in which five of the seven judges ruled that Northern Ireland’s abortion law breaches the UK’s human rights obligations.]

The court has stated that in cases of fatal foetal abnormality Northern Ireland’s abortion law is incompatible with the UK’s human rights obligations under the European Convention on Human Rights.

In July, Parliament passed the Northern Ireland (Executive Formation) Act, which will see abortion in Northern Ireland decriminalised and made lawful including in cases of risk to health, sexual crime and where there is a serious and fatal foetal abnormality, unless the Stormont executive is restored by 21 October.

In light of this law change, the Court will now seek further advice about whether a formal declaration of incompatibility will need to be made…

In a statement, Ms Ewart said:

“Today’s ruling is a turning point for women in their campaign against the outdated laws prohibiting against abortion in Northern Ireland.

“It should never have had to come to this.

“Today’s ruling is a vindication of all those women who have fought tirelessly to ensure that we never again have to go through what I did in 2013.”

“This has been a long and difficult journey for our client. The Court has now formally ruled that the current law breaches our client’s human rights.

“This is a hugely significant ruling in our clients’ campaign against the discriminatory and archaic laws that have denied the rights of many.

“We now look forward to an early hearing on the question of relief, so that this matter can be finalised once and for all.”

How Soon Is Now?

26 thoughts on “Meanwhile, In Belfast”