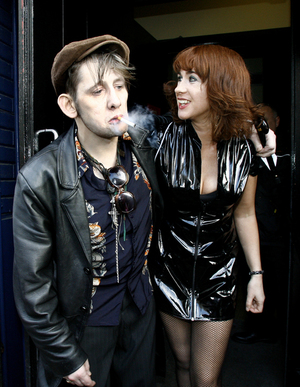 Comedian and actor Pat Shortt is in studio, making his way through the audience as his latest character.

With Christmas around the corner, Ryan will be speaking to a number of volunteers who have been working tirelessly with Ireland’s homeless over the past year…

Comedian Jason Byrne will also be joining us, giving his take on recent news stories and chatting about his series of children’s books.

The main event of the evening will see the good and the great of the Irish entertainment and music industry pay tribute to the legendary singer and songwriter Shane MacGowan.

Tipperary’s most famous son is in studio, performing a number of his best-known songs, including a very special rendition of the greatest of all modern-day Christmas songs, Fairytale of New York.

Over the course of a lively evening full of songs, chat and laughter, Glen Hansard and Lisa O’Neill pay tribute to Shane, joining his band for a stunning rendition of A Rainy Night in Soho.

Guests including Aidan Gillen, Patrick Bergin, Moya Brennan, Philomena Begley and Pat McCabe will join Ryan, Shane, and his wife Victoria Mary Clarke, discussing the writing of some of his best-known songs and the impact he and The Pogues have had on the Irish music industry.

Shane’s sister Siobhán MacGowan, journalist and musician, will also be chatting with Ryan. US politician Martin O’Malley has flown in for the evening, giving a hat-tip to Shane and the impact his music had on him as an Irish-American.