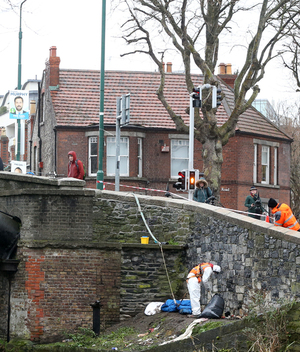 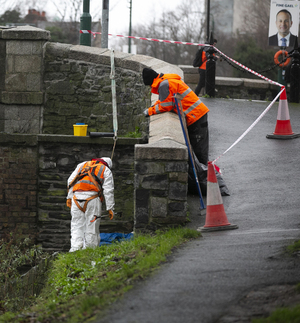 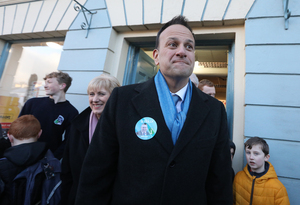 From top: At Leeson Street Bridge, along the Grand Canal, this morning where a man was seriously injured after his tent was removed by ‘heavy machinery’ on Tuesday afternoon; Taoiseach Leo Varadkar canvassing in Cavan yesterday

The man who was seriously injured when the tent he was sleeping in was removed from the Leeson Street Bridge area along the Grand Canal on Tuesday afternoon remains in a serious condition.

Taoiseach Leo Varadkar was at a joint press conference with the new EU Commissioner president Ursula von der Leyen when he said he never tried to make the incident involving the man a party political matter.

“In terms of what the lord mayor has to say, I have never sought to make homelessness a party political issue.”

“…No, I didn’t mention blame at all. I think it is reasonable that the lord mayor of Dublin, who is politically accountable for Dublin City Council, should also make a statement. I am sure he would be willing to do that.”

The Lord Mayor of Dublin and Fianna Fáil general election candidate, Paul McAuliffe did release a statement about the matter.

It followed the Taoiseach’s call for him to do so as, the Fine Gael leader claimed, Mr McAuliffe is “politically responsible for the council”.

“I was disappointed that the Taoiseach went down this road today.

“A man was seriously injured and yet An Taoiseach appeared to be more interested in apportioning blame to someone else.

“Waterways Ireland carried out the works this morning. Officials from the Dublin Regional Housing Executive (DRHE) were on the scene to support any homeless people with accessing accommodation.

“I understand due to the precarious location of the tent, Waterways Ireland decided to make use of a mechanical vehicle. All of these details will now be the subject of a Garda investigation.

“There may be an election ongoing at the present but a human being has been seriously injured this morning.

“That was my first concern when I heard about it, and I wanted to find out the details and so I have asked for a full report.

“It seems that the Taoiseach’s first thought was to play a political game.”

Previously: “The Lord Mayor Should Make A Statement”