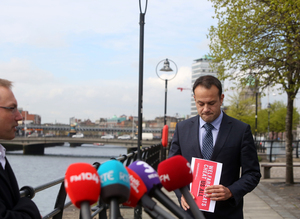 Leo Varadkar, then Minister for Social protection, launching the ‘Welfare Cheats Cheat Us All’ campaign, April 17, 2017

Via Village magazine [more at link below]:

[Leo Varadkar’s] nastiest single initiative came just before he stood for the leadership of his party, with the fractious ‘Welfare Cheats Cheat Us All’ campaign.

But it positioned Varadkar where he wanted to be.

Imagine being in the prime of your life and at the top of your career and deciding what you want to do is target the most disadvantaged in society, those most discriminated against in the most tangible ways, economically and socially.

Imagine feeling that you want to spell out a message that the most scandalous misappropriations are by the welfare classes not the bankster classes.

Imagine being Minister for Social Protection, representing the classes that have nothing to get up for in the morning and running a campaign that promotes those who get up early in the morning.

What constitutes robustness when standing up to the clowns in Fianna Fáil accelerates into meanness when deployed against the vulnerable and the impoverished in society.

He recently wrote in the Irish Independent:

“We have allowed society to be divided into one group of people who pay for everything but get little in return due to means-tests, and another who believe they should be entitled to everything for free and that someone else should pay for it”.

The gratuitousness of the divisiveness derives from the simple fact there is no such second group. While he later claimed he intends to unite it, this is cynical rhetoric, for the beef is in the divisiveness.

….Varadkar melds neoliberalism and anodyne blandness. But the glue he deploys is the most interesting thing about the man, for the glue is the glue of nastiness.

Go Easier On The Nastiness (Village)

36 thoughts on “Bringing The Nasty”