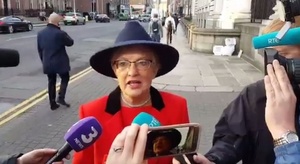 Twenty days ago, the Early Years Alliance announced its plans to hold a protest on Wednesday, February 5.

Thousands of providers are reportedly expected to take part.

However, Minister for Children Katherine Zappone on Tuesday released a circular telling providers that those who close their service in order to attend the protest will lose payments.

They’ve also been told that they cannot change their working calendar – to allow for the creches to close next Wednesday.

This morning. Paula Donohoe, of Clever Clogs Childcare in Ballyconnell, County Cavan, spoke to Seán O’Rourke on RTÉ Radio One.

Asked about the circular from Ms Zappone’s department and if she will still attend the protest in light of it, Paula said:

“Yes, in fact, the circular, as of Tuesday, has probably made me even more resolute…this is the reason, the very reason we are going out on this protest is the behaviour of the department, and the minister and her department that led to Tuesday’s action.

“What Tuesday, the announcement on Tuesday was that they will not fund the services. Now I get that, if you’re not working, you don’t get paid.

“But we have always been entitled and able to, under our contractual arrangements with the department, to change our calendar.

“As long as we run it by [inaudible] on behalf of the department, which is the county childcare committee. I have had to do this in the past. There has never been a problem. I’ve changed my calendar and I’ve never had to to give a reason as to why I had to change my calendar.

“I’ve changed my calendar, had it approved and re-issued a new calendar.

“The circular on Tuesday, or the announcement on Tuesday by the minister, was that we are no longer allowed to actually change our calendars.

“My intention always was to close next Wednesday, the 5th of February but to provide the parents and children of my service…an alternative day so the children to not lose out.”

Mr O’Rourke asked Ms Donohoe if her 25 childcare workers will now lose a day’s pay because of the closure in order to attend the protest. She said:

“Absolutely not. I’m fighting on behalf of my staff for a very long time, for very low waged professionals. So, in my case, I can verify that they will get their wages.

“Whether I get my Government funding or not, those girls will get their wages. There is absolutely no way I will punish them.”

13 thoughts on “And Your Little Dog Too”