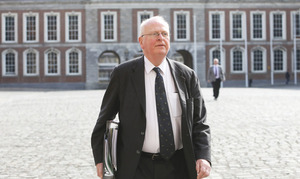 Senator Michael McDowell said Sinn Fein TDs and Senators “don’t decide anything” and are told what to do.

He added: “The TDs and Senators don’t decide anything.”

Asked by Mr O’Rourke how he knew this, he said: “Because I was told directly by one of their parliamentarians.”

“And I’ll tell you exactly how, Seán. Do you remember the Senate Reform Implementation Group. I asked all the participants to give me an undertaking that we could set aside an afternoon to finalise the report. I said ‘can each of you tell me that there will be no parliamentary party meeting to distract you, or to take you away’.

“And we went around the table and when I got to the Sinn Féin participant, he said ‘we don’t have a parliamentary party’. ”

“They don’t have meetings of their parliamentary party as such in Leinster House.”

The 23-member implementation croup, consisting of 11 Senators and 12 TDs, was chaired by Senator McDowell. It was tasked with assessing the recommendations made by the Working Group on Seanad Reform in 2015.

Sinn Féin did not “put the word out” that Paul Quinn was engaged in criminal activities, the security forces on borh sides of the border did. But Mick is another shinner hater so you expect this biased rubbish.#GE2020

Michael McDowell is being a blatant liar on @TodaySOR. He is stating SF don’t have parliamentary party meetings and TDs don’t make decisions. A liar.#GE2020

Earlier: “When You Leave This Studio, Could You Pick Up The Phone And Talk To Her?”

Yesterday: How Was It For You? [Updated]

“I Mean, Are You Trying To Have It Both Ways?”

“When You Leave This Studio, Could You Pick Up The Phone And Talk To Her?”