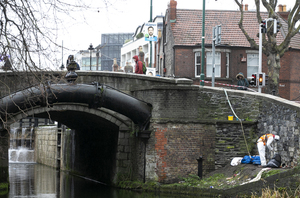 The Irish Mirror reported that a Garda investigation is continuing into the incident in which a homeless man suffering life-changing injuries while his tent was being removed from along the Grand Canal at lunchtime on January 14.

The man’s tent was being removed as part of works carried out by Waterways Ireland, which is responsible for maintenance of the canal, and Dublin City Council.

The Irish Mirror article is the first media update on the incident since the week it occurred.

The only other update came from Fine Gael leader Leo Varadkar who spoke about the man during RTÉ’s Prime Time TV leaders’ debate days before the election, saying:

“We’ve been in touch with that gentleman, a housing plan is being put in place for him. Thankfully his condition, he is stable and he has asked for privacy and I don’t want to make him an issue in this debate.”

Gardaí are tracking down homeless people and pedestrians who were nearby when a man suffered life-changing injuries as he was crushed by a council lorry lift.

Detectives are piecing together the movements of the city council workers and taking statements as they gather evidence for a potential endangerment probe.