Almost half of Irish people want Mary Lou McDonald to be the next Taoiseach, according to an Amarach research poll of 1040 Irish adults conducted for Extra.ie on February 16.

…The 50-year-old Sinn Fein leader was dramatically more popular among younger voters compared to both Fianna Fail and Fine Gael’s leaders — a staggering 52% of those under 35 polled said that they would like to see the president of Sinn Fein as the head of the Irish government. 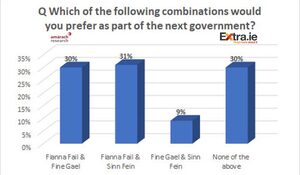 When it comes to forming a new government, Sinn Fein combined with Fianna Fail is the preferred option for Irish voters, according to an Extra.ie poll.

Just 9% wanted a Fine Gael/Sinn Féin government while 30% of people wanted a coalition that didn’t involve those three options. The poll, conducted on Monday, indicates that Sinn Féin would benefit more than any other party if there was a second election and receive an additional 10.5% of first preference votes.

Sinn Fein and Fianna Fail the coalition of choice for Irish voters — (Extra.ie)