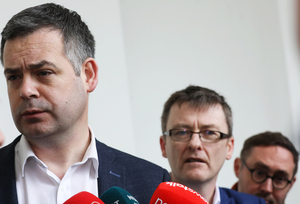 Via historian Brian Hanley in The Guardian (full article at link below):

This hysteria has several roots. Some evidently dislike the idea of a “northern” party holding power “down here”.

Others, usually sotto voce, echo the view of the political correspondent John Drennan who once suggested that Sinn Féin supporters existed on a diet of “chips, Dutch Gold and batter burgers” – a nod to the party’s supporters being mainly working class.

The negative coverage of Sinn Féin’s breakthrough also reflects annoyance at the disruption of the two-party system, which has served as a comfort blanket for commentators who like to portray Irish politics as “non-ideological”.

… There is no doubt that republican veterans retain huge influence within Sinn Féin. But references to the IRA’s campaign had little impact on the new voters attracted to the party. For them the recession is far more relevant than a conflict that ended 25 years ago…

But what people are aware of is that since 2017 Fine Gael and Fianna Fáil have been demanding that Sinn Féin return to government with the Democratic Unionist party in Belfast.

It seems strange then to assert that it is unfit for power in the Republic. Indeed if the IRA army council is really running Sinn Féin, then how does DUP leader Arlene Foster (a woman whose father was actually shot by the IRA), share power with them in Northern Ireland?

For many voters, particularly the young, the exclusion of Sinn Féin is more about the establishment protecting itself than morality…

Hysteria over Sinn Féin entering government is about power, not the past (Brian Hanley, The Guardian)

Earlier: After The Deluge