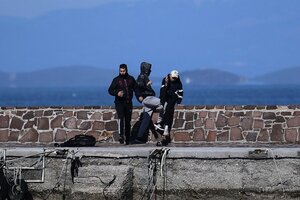 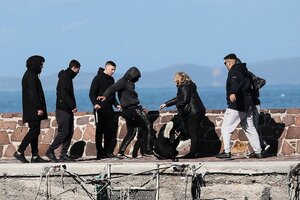 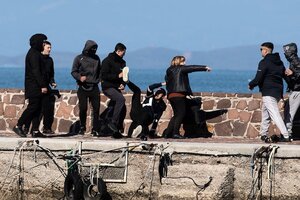 My cameras were thrown in the water. I was beaten and kicked heavily. This lasted a while. No police on site, also as I left. Some locals that disagreed with what the attackers did took care of me. And I am with friends.

Violence has escalated on the island of Lesvos in Greece since Turkey’s President Recep Tayyip Erdogan vowed to “open the doors” for migrants to enter Europe. His announcement late last week followed the death of 33 Turkish soldiers in an air strike in Idlib province in northwestern Syria.

Since then there have been reports of an increase in refugees and migrants arriving in Lesvos with some telling journalists that they were offered a free boat ride, while it’s elsewhere being reported that guards on Greece’s northeastern land border with Turkey used tear gas to stop refugees and migrants from entering Greece.

In turn there have been reports of volunteers and journalists being attacked by people who don’t want refugees on the island. Irish GP Dr Nicola Cochrane, volunteering at the overcrowded Moria refugee camp in Lesbos, which has a capacity for 3,000 people but where more than 20,000 people are now residing, has told The Irish Times about how she was targeted by a group of men with “planks of wood and baseball bats” yesterday.

The Hope Project, run by Eric and Philippa Kempson on Lesvos provides support for refugees on the island which overlooks the Aegean Sea and the Turkish coastline from its northern border.

We have woken up in full fascist Greece today. The events of the last days have been hard to comprehend. All foreigners are now living in fear.

Yesterday refugees were attacked along with journalists and volunteers. It’s hard to explain the fear of the mob until you experience it. Many people are utterly traumatized.

All rescue groups have stood down through fear for their safety.

The mayor of Mytilene has refused to allow refugees to be transported from the north to Moria. The result of this is that refugees arriving are left on the shore with no help and no where to go. With no food or water in wet clothes.

The residents burned down stage two transit camp last night. Volunteers were attacked by gangs with bats and chains!

Some volunteers were unable to return to their homes because of mobs of angry people blocking roads. The government of Greece has basically suspended all human rights!!

The Hope Project will remain closed today and untill we can guarantee the safety of the refugees attending. A sad and scary time.

8:30 am today a boat close to the border line capsized and the Coastguard saved 46 refugees. One kid was transferred unconscious to the hospital.

Caoimhe Butterly: Inside the refugee camp (The Irish Examiner)

49 thoughts on “Meanwhile, In Lesbos [Updated]”