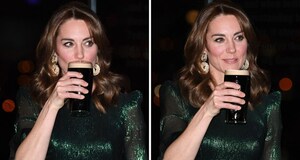 Kate and Wills were poured a pint of Guinness, and while William took a generous gulp, his wife has been accused of taking a ‘fake sip.’

Is the future Queen Consort expecting her fourth child?

‘I’d bet she didn’t even take a mouthful,’ commented one royalist, while another made a VERY telling observation about Kate’s new, short ‘do.

‘Each time a pregnancy has been announced it was a few weeks after a change in her hairstyle……… just saying.’

Last night: A Pint Of Plain

A Pint Of Plain