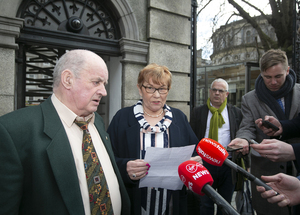 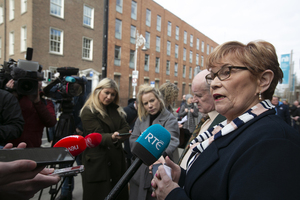 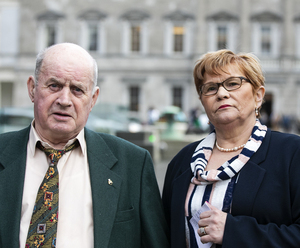 The mother and father of murdered Paul Quinn, Steven and Breege Quinn after attending the Dail today as TDs return to the chamber for the first time in two weeks.

In 2007, Mr Quinn (21) from Cullyhanna in south Armagh was beaten to death by a gang of around a dozen men in a farm shed on the border near Castleblayney, County Monaghan.

At the time of the murder, Mr Murphy alleged that Mr Quinn was involved in criminality before he was killed.

Ms Quinn said she was not satisfied with what she termed “obscure apologies” to date, and alleged that “the slur’ that her son had been a criminal is being ‘actively promoted by Sinn Fein.’

Ms McDonald has also spoken to the Quinn family on the phone.

“He (Conor) has made an apology. It’s sincerely made and I hope and trust that the Quinn family will get some level of comfort from that,” Ms McDonald said last month.

31 thoughts on “The Hardest Word”